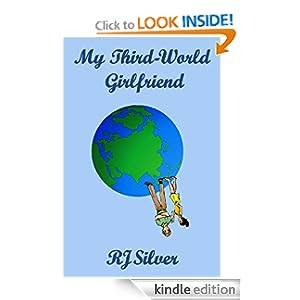 Gerry is a middle-aged man depressed by his life-long history of failed relationships and women throwing things at him, not necessarily in that order. He's doing some soul-searching in the airport when he overhears a trio of dedicated rakes (for lack of better adjective) planning to move to Thailand where, they believe, the women will be easier to deal with because they haven't heard of women's liberation. Soon Gerry finds himself in Thailand, torn between the age-old conundrum of trying to please his new girlfriend and his old buddies, whom his girlfriend naturally hates because they are dicks.

I really liked RJ Silver's The Princess and the Penis (review here) and The Ballerina, the Gymnast, and the Yoga Master (review here). My Third-World Girlfriend is a little more serious than either of those stories, but it's also more grounded in reality--comparatively speaking, of course.

There's a definite connection drawn in this story between economic and sexual dominance. The West has a long history of going into Asia and doing whatever they want, and Gerry's three buddies continue that with the justification that people in Thailand don't know any better. "...if finances are going to force us to settle down now, I'd rather find a woman less inclined to violence," one of them says. Another of the three states, "The Chinese are too capitalist now. The vomen [he's German] there vant so many things, vee'd have to share von just to split the costs." And, once Gerry moves in with his girlfriend, she controls the household budget.

There are lots of funny one-liners in this novella, but I think what makes My Third-World Girlfriend feel more heavy than Silver's other stories is that Gerry's buddies have absolutely no redeeming qualities. In both TP&tP and TBtG&tYM, there are very few characters who aren't likable, even if they are misguided. In My Third-World Girlfriend, more than half of the characters--Gerry's friends--are totally hopeless. It kind of makes the story almost a battle between good and evil. You want to be like, "Don't listen to Hank the Relationship Yoda, Gerry!"