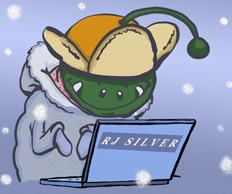 Today I'm pleased to have a chance to interview RJ Silver, who writes wonderful, entertaining short stories such as The Princess and the Penis (review here) and The Ballerina, the Gymnast, and the Yoga Master (review here), and My Third-World Girlfriend (review here), all of which are must-reads if you enjoy romantic comedy. I thought it would be fun to ask RJ a few questions about his books and being an alien.


RJ Silver: I got fed up with the publishing establishment. I had one of the top literary agents in the world, and my thrillers were making the rounds with senior editors in the biggest publishing houses, but they seemed to want to cookie cut me into a marketing package, often requesting changes to my books solely to satisfy marketing demographics. That was a disheartening commercial end to my long creative journey, so I said “the hell with it” and decided to write just for fun.

Tasha: Do you consider yourself a "romantic" writer? In content, not personality. ;)


RJ: Well, first of all, you’re asking a man a question with the word “romantic” in it. There’s not a man on this planet who can tell you what that word means, as we rely completely on women to explain it to us. I do believe in love, however. And long-term relationships. And positive, uplifting thoughts. You mix all those together with a little humor, and that pretty much explains why I write the stories I do.


RJ: You know, I was never a bookstore guy. I tended to get hooked on certain authors, then go from store to store buying everything that author ever wrote. As for pubs, there have been so many (blush). I like little quirky places, full of oddball characters and good-natured buffoonery. You know, some place I easily can fit in.


RJ: Not this alien. Well, it’s not that I don’t like cats. I just don’t understand them. I mean, you treat a dog well, he’s going to lick your face. Cause and effect are very clear. But with a cat, I never know what its thinking. I’ve tried to be affectionate with some, only to have them hiss and claw at me. Others, I’ve completed ignored, only to have them jump on my lap and purr. I’m starting to think they’re collectively messing with me, then getting together to chuckle about it afterward.

Tasha: Since you're an alien, have you thought about writing science fiction? Attack of the Amazonian Aliens, etc.?


RJ: As I’m a huge sci-fi fan, I’ve definitely thought about it. But you have to remember that, given where I’m from, writing about humans is science fiction!

Tasha: In My Third-World Girlfriend, is there a connection between sexual, cultural, and economic dominance?


RJ: Totally. Actually, it goes further than that, becoming outright exploitation of poor women by rich men (relatively speaking). Worse still, it’s exploitation that all too often ends in broken hearts. I see it every day here in Bangkok and it disgusts me, which is what compelled me to write My Third-World Girlfriend in the first place. Being in love with a smart, well-educated, strong Thai woman, I also wanted to combat the stereotype of Thai women as being all bar girls and prostitutes. That part of society does exist here, but the vast majority of Thai women are a lot more like Kinlaya (and thus Jan).

It’s  been very interesting to observe the reaction to this book, incidentally. I think most of my fans (predominantly women) didn’t really like me venturing into quasi-serious subject matter, which kind of surprised me, because usually women are telling me to grow up and act more responsibly.  But when I’m writing, they seem to prefer the other me, you know, the one they make sit in the corner three times a day for lengthy timeouts.

Tasha: You like to play off of stereotypes in your stories. What's one cliche you would love to satirize that you haven't yet?


RJ: Ooh, don’t get me started. I have so many characters I’m experimenting with. The ultimate pessimist, for example. I’m such an irrepressible optimist, I think it’d be fun to invert that perspective. I’ve had so many clashes and with bureaucracies and authority figures in my life, I’m definitely going to poke some fun at one of them at some point. And we still live in an age of such repressed female sexuality (despite having come a long way), I see a sexually voracious female character in my future, too (a kind of reflective satire, where you satirize something by way of its opposite).

Tasha: What would you recommend a Western visitor in Thailand never do?


RJ: Go to Bangkok’s red light district. There’s a lot of human suffering down there. Don’t feed it.


Thank you, RJ! Please check RJ out on the webbernets at his Blog, Twitter, FaceBook, and GoodReads.
at 12:19 AM