Review: THE SHERLOCKIAN by Graham Moore 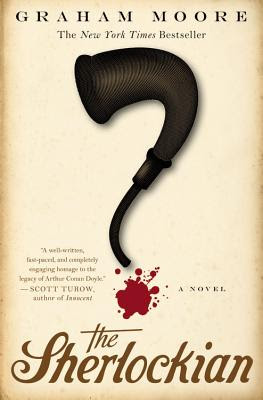 I have this weird thing: I hate the original Sherlock Holmes stories. I tried, okay? But there are hardly any women in them and they're just boring. That being said, I LOVE Sherlock adaptations. Maybe it's the fact that I find the survival of his character as more of a real person than a fictional character fascinating; or maybe it's that Sherlock mysteries are always about the reign of logic and empirical evidence--yawn--while the Sherlockian ephemera produced in their wake is incredibly illogical and theoretical. Either way, if there's a Sherlock spin-off or adaptation, I'm all over that. That's why I really wanted to read The Sherlockian as soon as I heard about it, and Sheila from One Person's Journey Through a World of Books was kind enough to send me her copy of the book.

This novel started off really well. It's told in two alternating story lines, the first one being from the perspective of Arthur Conan Doyle during The Great Hiatus (the years during which he didn't write Holmes stories); and the second taking place in 2010, told from the perspective of Harold White, one of the youngest people to be inducted into the Baker Street Irregulars. Harold is lovably nerdy, and even Conan Doyle wasn't as annoying as he's usually made out to be. The Conan Doyle story has a writing style that attempts to imitate Victorian prose, filled with extraneous details and overly long sentences (I just want to say that I hate when authors do this. *coughTheFlightofGemmaHardycough* If you're not a Victorian, and if the reason behind the style of writing you're imitating doesn't apply, please just don't do it). It drove me a little crazy at first, but I was able to ignore it for the most part and enjoy the setting. Graham Moore clearly did a lot of research for this book, and it shows. Plus, the mystery in this historical section was fabulous.

The contemporary section, on the other hand, had a very different vibe. It was very funny and read more like an adventure than a mystery--it kind of reminded me of the movie A Shot In the Dark, which I adore. I also love Harold, who is a total nerd and Sherlock fanboy. Unfortunately, the mystery in this section wasn't set up as well as the one from Conan Doyle's storyline, and I got bored with it pretty quickly.

About a third of the way through the book, it started losing me, mainly because of the constant flipping between 1900 London and 2010 New York City. That's a always a concern for me when I encounter a book that alternates between time periods. It can be pulled off--Wonderstruck by Brian Selznick (review here) being a perfect example--but it usually doesn't work, and this book was no exception. The chapters in The Sherlockian tend to be very short, so it was difficult to stay invested in one story line only to have to switch to another, especially considering the difference in writing style and tone for each.

In the interest of saving my sanity, I knew I had to pick one story line and just read that; but the problem was I liked each storyline, for different reasons. I chose to go with Harold's storyline, because the characters were so fun; but the mystery itself was skimmable and really over-the-top. Which is crazy, because as Moore tells us in the final pages of the book, it's based on something that actually happened. That is way more interesting than the novel version!

I still like the idea of The Sherlockian, and found it enjoyable, but I wish Moore would have chosen to focus on just one of the stories in this novel. Perhaps he could have interspersed the Conan Doyle scenes in a more creative way. I get what he was trying to do, but because of the narrative structure, I found it difficult to emotionally invest in the characters. I do hope to read more books from him in the future, though!