Discussion: THE FLIGHT OF GEMMA HARDY by Margot Livesey 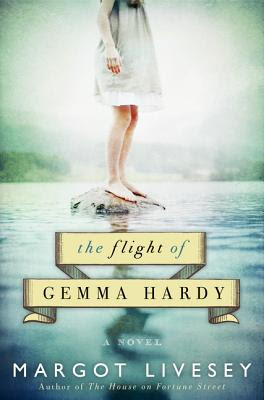 Today I'm discussing The Flight of Gemma Hardy by Margot Livesey with Colette from A Buckeye Girl Reads. This is part two. To read part one, please head over to Colette's blog, then come back! :)

Did you notice that whenever someone drove Gemma around, they braked for small animals?

Tasha: Yes. This book was filled so many random details. Maybe it's a symbol of something, but if so, I don't know what.

Colette: You are right, they always did break for small animals. I'm sure it was a metaphor for something. However when I read I don't look for metaphors, so when used in books they are always lost on me unless it's super obvious. There were a lot of random details in this book, and I'm sure they all were connected in some way that we are missing.

Tasha: I do read for metaphors and symbolism, and if the details represented anything, I think it was an unwillingness on Livesey's part to kill her "darlings." Perhaps she added extraneous detail because she wanted the novel to sound "Victorian" and didn't understand that the detail was there to make a point? I did like her writing style, but this book needed a lot more work and a heartless editor.


Birds are mentioned a lot throughout the book, what do you think they were trying to symbolize?

Colette: At first I thought the bird thing was there just to connect us to the original story of Jane Eyre. Now, though I'm thinking that it could have been a metaphor for how much Gemma changes... and the different birds mentioned show her changing from someone with little confidence to someone who is sure of herself. I thought birds were an odd hobby for a young girl to have in the era this book was in.

Tasha: I thought the birds were a symbol of Gemma's longing to be independent and an adult. That's probably why she and Sinclair reunited on the plane.


Why did you keep reading?

Tasha: lol Well, when I was in the first part, I was holding out hope the second part would be better, even though you warned me it wasn't. And at first I did really like second part, with the description of the Orkney's; but then it started to feel like it wasn't flowing naturally and things were just happening because they happened in the original Jane Eyre, you know what I mean? By then I wanted to finish it just so I could whinge about it, haha. ;)

Colette: I did love the Orkneys landscape. The descriptions were beautiful. I think you are right, the problem with the second half is that things were happening with the original version, only updated to match the time period of this book.


What did you think of the ending when Gemma goes to Iceland to reconnect with her mother's family?

Colette: I hated the ending. I liked her going to Iceland, but unlike in Jane Eyre, I didn't understand why her family couldn't contact her after her uncle died. Why not hire someone to do it? Why do think they had Gemma be from Iceland instead of England? I couldn't figure that out... except to have it be a reason for her aunt not liking her.

Tasha: The whole Iceland thing did seem pointless. For one, she was doing fine without her family, I didn't get why finding them was such a pressing issue she HAD TO STEAL MONEY FROM HER FRIENDS to go there (again, unlike Jane, Gemma's actions strike one as selfish at best and amoral at worst). For another, that wasn't much of a family; and even if she did find them, who cares? They live in frigging Iceland! This isn't going to make a significant difference to her life. Good luck making international calls, Miss I-don't-know-how-to-use-a-phone.


What did you think of the book overall?

Colette: This is one of those books that when reading reviews on GoodReads on I felt like I read a completely different book then everyone else did. I can't help but wonder if it's because I was expecting a little romance and didn't feel like that part of the book came through very well at all. Do you think that is why we, as romance lovers had such a hard time with this book?

Tasha: I think it's reasonable to expect some romance in a novel that advertises itself as a Jane Eyre adaptation, but the main reason I didn't like it was because of Gemma. Jane Eyre is about a woman who never compromises her ideals to make her life easier, but still gets what she wants. Gemma is like the female version of Meursault from The Stranger. She doesn't have ideals, she's just out to get everything she can for herself... and also the characterization was really weak.


Although Colette and I didn't hate The Flight of Gemma Hardy, it definitely didn't get better as it went on, and the ending was horrible. You'd be better served to spend your time reading or rereading Jane Eyre over this trying-too-hard-but-still-not-getting-it adaptation. We would like to thank the publisher for providing us with copies for review, though!