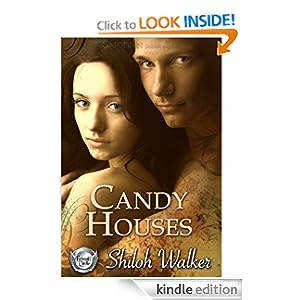 Greta is a Grimm, someone who fights demons. Pulled to Ann Arbor, Michigan, she encounters an old flame who is hunting one of their own.

I decided to read Candy Houses after Colette from A Buckeye Girl Reads told me she thought the new Grimm TV show might be based off this series (it's not). It's essentially an urban fantasy with the twist being the characters are from fairy tales. Greta is really Gretel from Hansel and Gretel, and her fellow Grimm is Rip (it took me an embarrassingly long time to figure out which fairy tale he was from). I usually love fairy tale twists, but here it felt like a gimmick because the characters really have nothing to do with their fairy tale counterparts and are actually angels fighting demons. Why not just write about angels then, one wonders? Plus, the "real" versions of these fairy tales, told from the perspective of the characters, are pretty lame. Especially in Rip's case--I would rather be left with the original fairy tale version.

That being said, I did love the romance between Greta and Rip. It was sweet and romantic, and really saved the entire novel.

If it wasn't for Rip, though, I would have been really bored. I skimmed through the unnecessarily long descriptions of demons and felt like the novel should have ended in the middle. 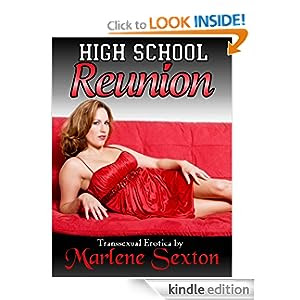 Jerry is dragged to his high school reunion by a friend, but finds himself in a pity spiral because, unlike many of his classmates, his life is a mess. He's divorced, living in a crappy apartment, and only gets to see his kid every other weekend. Then an attractive woman strikes up a conversation with him, and they wind up going back to her place. It's only then that Jerry finds out "Denise" is actually a Dennis.

I downloaded this erotica short story after KatieBab's review of it at Babbling About Books and More. How many books with transgender main characters does one come across, after all? Personally, I've never heard of single one, so I was intrigued to read something so unusual.

The writing style is 3rd-grade-ish, there are some serious LOLlines ("Jerry hadn't really considered that option... However, Denise could do it. She had a cock." ahahahaha), and Jerry seemed to take the fact that Denise had the body of a man a little too in stride, too quickly; but overall it was okay. The ending was lame and nonsensical, but it was free! (Please note that it's not free anymore, however.) 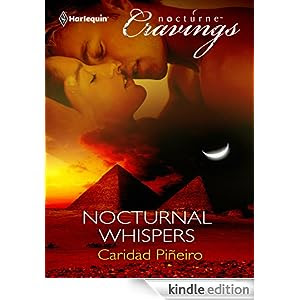 I bought this novella (50-ish pages) because it had a mummy's curse in it. I can't resist a mummy's curse! Lord Alec is 200-years-old, having been cursed by a mummy he took from Egypt to live forever and have sexy dreams of fellatio every night. Sounds onerous, eh? All he has to do to end the curse is reunite a child mummy with the mummy of its mummy. This has taken him OVER 100 YEARS even though he knows where both mummies are. Oh, and anyone who touches the baby mummy immediately turns into a nymphomaniac and starts humping people, preferably Lord Alec.

Maybe High School Reunion wasn't significantly better, writing- and plot-wise, but at least it didn't put me to sleep and was free. I'm kind of disgusted with myself for wasting time and money on Nocturnal Whipsers. I'd rather give those three dollars to a homeless person on the street.