Review: THE GHOST AND THE GOTH by Stacey Kade 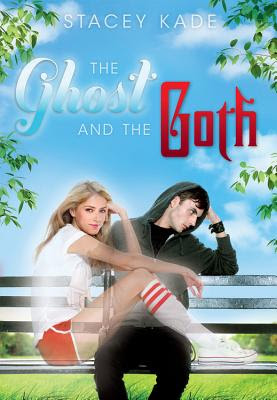 Alona Dare is the most popular girl at school, until she's hit by a bus one morning ditching first period. That's when her afterlife begins, and the only person who can see her is Will Killian, a loner freak she would not normally be caught dead talking to (pun!). But desperate times and all that...

I'm so glad my library had this novel because I ADORED it! I first saw The Ghost and the Goth on Forever Young Adult, where Jenny loved it but called it out for the cheesy title. The cover is also burn-worthy. BUT. You know that maxim that you should never judge a book by it's cover? It's totally true in this case. I cannot resist ghost stories, especially cute ghost stories with romance, and The Ghost and the Goth is an ideal example of that.

First of all, I LOVED the characters. I'm in complete book lust with Will, who is stoic and too smart for his own good. Being able to talk to the dead can make your life pretty miserable, so he tries his best to fade into the background in the hopes that the ghosts at school won't notice him. It's also pretty difficult to appear normal when it looks like you're talking to yourself a lot.

Alona, on the other hand, isn't exactly likable; but she is hilarious. Her attempts at giving people compliments were painfully funny, and the fact that she does help out Will and can get things done made me warm up to her. Plus I'm a sucker for opposites-attract romances, and the development of Alona and Will's relationship is so sweet and swoon-worthy.

Added to that, this story is told really well. Stacey Kade does a great of capturing your attention right at the beginning, then revealing layers and secrets to the characters and story at the perfect pace. She also has the atmosphere of a high school nailed down pretty well--in fact, I wonder a little if we didn't go to the same high school, because I recognized a few of these characters. The only part of the book where the tone was slightly off was the climax, but I'm willing to overlook that even though it was kind of cheesy.

The ending also bothered me, as Kade had several opportunities to wrap-up the story, either tragically or comically, and bypassed all of them. That's right, welcome to the time-and-money-suck vortex of unnecessary YA series. The Ghost and the Goth could (and should) have been a standalone novel, but instead it's now a trilogy. I mean, a part of me is happy, because I do love Alona and Will, but there's a bigger part of me that wants to do this:

Aside from that, though, this book is pretty brilliant. Great characters, romance, fab storytelling--I actually bought a copy, that's how much I enjoyed it. I really think you ought to read it.