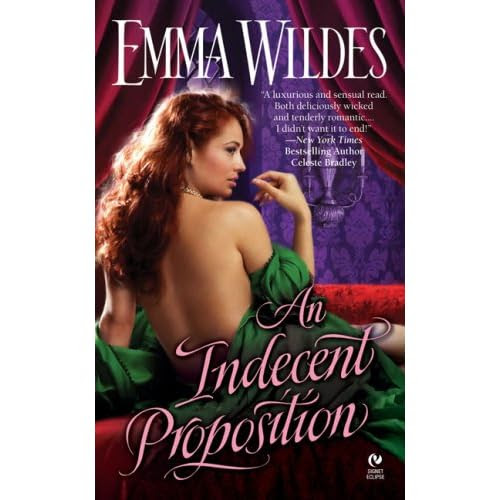 An Indecent Proposition by Emma Wildes

Despite the potential for ick in this book, it was pretty good.

Potential for ick, you ask?  Well, the plot centers around a bet between the Duke of Rothay and the Earl of Manderville, concerning which one is the better luhvarrrr.  The only problem is, who is going to decide which one wins?  Enter Lady Carolyn Wynn, a widow known for being standoffish, who offers herself to the pair as a judge for their bet.

When I first started this book, I had some qualms that it was going to be seedy.  Or sordid.  One of those s-words.  But it wasn't at all.  From the first meeting of Carolyn, Rothay, and Manderville, it's fairly obvious that Rothay and Carolyn are going to end up together.  While their story arc is one of those they-fall-into-bed-together-and-realize-they're-in-lurve types, which I'm not usually a fan of, here it wasn't too bad.  The characters of Carolyn and Nick (Rothay) were well-drawn and likable, and the motivation for Carolyn to offer to participate in this sketchy endeavor was understandable, even if I found it pretty amazing she had the balls to do it.

Meanwhile, the sexiness of the Carolyn/Rothay story is balanced very nicely by the Earl of Manderville's story arc (he's in love with someone who doesn't return his affections), which is much more of a traditional and sweet romance.  Usually sub-plots in romance novels seem superfluous to me, but Manderville's story was probably my favorite part of the book; and it fits in very well as a foil to Rothay's arc.

About halfway through the book, the characters started to annoy me a bit.  Rothay is obsessed with this woman who played him when he was seventeen--dude, get. over. it!  And Carolyn putting up with her gross cousin-in-law was simply mind-boggling to me.  The ending also felt a bit rushed.  But overall this was a good historical romance.