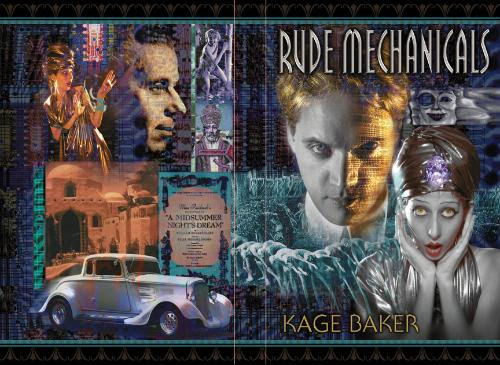 I read this as part of Jenners' Take a Chance Challenge at Find Your Next Book Here to satisfy the requirements for the second challenge, Random Word:

Go to this random word generator and generate a random word. Find a book with this word in the title. Read the book and write about it.

My word was "mechanical." Do you know how many genre novels have the word mechanical in the title? Not that many. Also, strangely, a high percentage of them have something to do with Shakespeare. Anyway, I sorted through the few candidates and decided Rude Mechanicals by Kage Baker was the least of the evils.

Rude Mechanicals is about two time-traveling cyborgs, who call themselves Immortals (even though this is a misnomer, since they were never alive to begin with), that live in 1930's Los Angeles. One, Lewis, is an assistant to the assistant director of Max Reinhardt's production of A Midsummer Night's Dream; and the other, Joseph, is a private detective for Metro Goldwyn Mayer. Why are there time-travelling cyborgs, you ask? Well, they work for an organization in the distant future that invented time travel, but decided it wasn't profitable. So instead they send out cyborgs to collect historical artifacts and sell them as intiques in the future. Lewis is supposed to collect Reinhardt's production notes, and Joseph is protecting a treasure buried in the Hollywood Bowl. But then the treasure is dug up, and Jo needs Lewis' help to get it back.

You would think that would be pretty easy for the cyborgs, since they have super strength, zoom vision, heat vision, super hearing, telepathy, can control electricity, and can alter chemical compositions; but instead, it takes them like 70 pages to get the treasure (a violet diamond). The story kind of drags. What are the consequences if they don't get the diamond? Will they be fired? Go to the great cyborg scrap pile in the sky? I don't know, so there doesn't seem to be that much at stake in their search.

Another problem with the book is that we as readers don't see a lot of the action. Lewis is the central character, but he's not the one getting into scrapes while chasing for the diamond--Jo does that while Lewis waits in the car. So all the "hilarious" action is delivered to us by Jo, telling Lewis what happened after the fact. Talk about action.

The book isn't terrible. If I had read the rest of Baker's many, many Company novels and had more invested in the characters, I might have enjoyed it more. But as it was, for me it was surprisingly draggy and boring for a 114-page book.

Even though I didn't enjoy this book, so far I am enjoying this challenge. God knows I never would have picked up Rude Mechanicals if it wasn't for the Take a Chance Challenge, and it was nice to read something completely different for a change.

I have also picked out the books for challenges 1, 3, and 4; I just haven't read them yet. For challenge 1, random book selection, I'm reading The Firemaker by Peter May

; for challenge 3, birth year book, I chose Kill the Dead by Tanith Lee

; and for challenge 4, judge a book by its cover, I chose Laura Rider's Masterpiece by Jane Hamilton 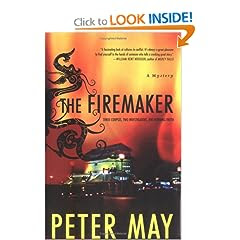 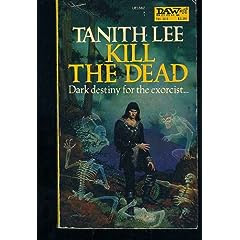 I'm still thinking about the movie/book comparison challenge. I've written down some possibilities: My Cousin Rachel, Lonesome Dove, Coraline, and The Time Traveller's Wife (not sure if that will come out soon enough to count for the challenge, though), but I haven't committed to anything yet.