What Are Your Favorite Contemporary Romances?

Drive Me Wild by Julie Ortolon

Julie Ortolon is one of my favorite contemporary romance writers.  Drive Me Wild was her first release, and it's still my favorite.  Laura Beth is a shy, small town girl who has always yearned to escape from Beason's Ferry, Texas--just like her best friend from high school, Brett Michaels, who was the town bad boy but is now a big-time TV news anchor.  This book has some of my all-time favorite romance tropes:  uptown girl meets downtown boy; childhood sweethearts (even though they were technically just friends), and a brooding hero.  Also, fast cars--fast cars are always a plus.

I wasn't sure I was going to like this book, and at first I didn't.  But then I realized it was actually a take on Pride & Prejudice, and one of the cleverest ones I've ever read.  Hard working, no-nonsense Taylor is assigned to babysit movie star Jason, whom ALL the women want because he's handsome and rich.  And he knows it.  I loved the character of Jason and how this book feels like a Preston Sturges romantic comedy.  A totally fun and enjoyable read. 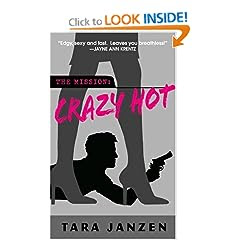 Have I mentioned I love fast cars?  Well, Janzen's Hot books are full of fast cars.  Quinn Younger is a former car thief who is now working for black ops out of... Denver?  Hrm.  Okay, whatever.  Anyway, former bad boy, yay!  And he's been obsessed with this woman named Regan ever since they were teenagers and he helped her professor father out at a dinosaur dig (part of juvenile offender reform program).  This is another really fun book that's total escapist reading.  And the love scene on the hood of Quinn's car?  Definitely hot.

It Must Be Love by Rachel Gibson

One of the most enjoyable contemporary romances I've read. The hero is a cop (I heart stories with cops), and the heroine is a New Age-y yoga instructor. Will the no-nonsense cop be able to get along with the miss flighty spirituality froo-froo? I just don't know! 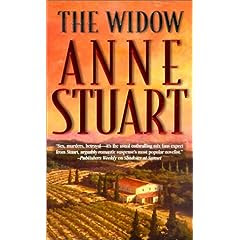 The Widow by Anne Stuart

One of the things I love about this book is that the character of Aristide, the dead half of "the widow," is based on Picasso.  Art history shout-out!  Also, the heroine, Charlie, is kick-ass; and the hero, Connor, is really hawt.  Add in a Gothic atmosphere set among the beautiful scenery of Tuscany and this book is a total win. 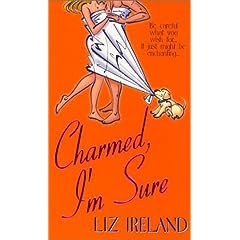 Charmed, I'm Sure by Liz Ireland

One of my friends told me I should read this book, and I'm glad I did.  A woman named Callie accidentally turns her boss into a golden retriever, and then she falls in love with his nephew.  The set-up sounds lame, but aside from being really funny, this book is actually surprisingly impactful.  The characters are so well-drawn that you can't help but sympathize with them, and despite the fact that one of them has magical powers, they deal with real-world problems.  I was really touched at the end of this book, and it was entertaining.  What more can you ask for?

This is by far my favorite Susan Andersen book.  Nick is a high-society photographer.  He hires Daisy, a security guard, to help protect him from the mafia--or something.  But the twist is, when they were teenagers, Daisy was in love with Nick and he disappeared immediately after the first and only time they had sex.  So she's pretty pissed at him.  I love the twist of having the heroine be the tough cop character, and Nick and Daisy have awesome chemistry together.

What are your favorite contemporary romances?