Last week I read two books that have been sitting on my TBR pile for quite a while:  Show No Mercy by Cindy Gerard

and Ice Storm by Anne Stuart

.  Both have similar plotlines:  a tough, daring woman meets a dangerous man with whom she has extensive history, and there's a lot of shooting and killing, etc.  But I only liked one of these books, which I think demonstrates once again that it's not what you write, but how you write it.

Show No Mercy is about a tough reporter who was kidnapped and tortured in Argentina.  She was saved by a man named Gabriel (nickname: Archangel), who is a member of some sort of security corporation called Black Ops.  After recuperating in the States for a while, she returns to Argentina to do an interview, and she meets Gabriel again.

The first thing that annoyed me about this book was the prologue.  I don't read prologues; and I really don't read prologues that are twenty pages.  Then there's another twenty or so pages where our heroine meanders improbably through a working ranch, musing about her sorry state and digging up a load o' backstory in her head.  Exciting stuff.  Finally something happens around page sixty, but by then I didn't care.  This was a DNF. 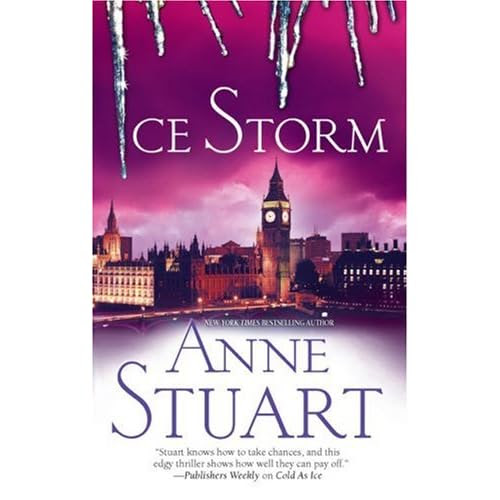 Ice Storm is about Isobel Lambert, the head of a corporation called The Company which was featured in three previous Stuart novels:  Black Ice

(my personal favorite).  Anyway, unlike Black Ops, The Company is run by some fairly shady people, and it meddles heavily in international affairs.  Basically the people employed by The Company are spies and assassins; but instead of working for a government, they work for a conglomerate.

Lambert is the Ice Queen; but of course she wasn't always like that.  At least, not until she fell in love with Killian, a mercenary who used her as a cover to get to Marseilles so he could assassinate a general.  He was the only man she ever loved, and the first man she ever killed.  Now she realizes Killian is actually still alive, working as a terrorist named Serafin (what is it with these men having angelic nicknames?), and that she needs to bring him in.

What I enjoyed about this book was that it starts off with a bang--Isobel murdering some baddies and returning to the office to receive her assignment, then realizing Killian is still alive.  It does give us backstory, but it gives it to us in several flashbacks, told as if the events were happening in the present.  Overall it has a very James Bond, Jason Bourne-esque feel to it.  Like an action film--and that is a good thing.

Something that contributes to the James Bond-y feeling is the question of Isobel's age.  She's been described throughout the series as ageless, anywhere from thirty to sixty.  So when the flashback scenes happen, you have no idea if the setting is the sixties, seventies, or eighties.  For some reason the deliberate timelessness of the narrative gives a lot more impact to the action scenes.

The only real quibble I had with the book was that it was a little too focused on the action and what I saw as a secondary plot (but was written more as the main storyline) of the The Company.  I felt like I didn't get to know Killian's character at all, and as a result I was sort of like, "Meh," when he and Isobel finally got together.  I was much more fond of the interaction between Lambert and Peter, which reminded me of the Emma Peel's and John Steed's relationship in The Avengers.  Not to mention the fact that who the villian was was suuuuuuuper freaking obvious.

Overall, however, this book was a well-written, entertaining, and quick read.  And it had what may be one of the best closing lines I've ever enountered in a romance novel:

"Come to bed," she said in her coolest voice.  "I can always shoot you in the morning."

"Of course you can, princess," he said.  And he got into bed.