Simone Elkeles is an YA novelist and the author of Perfect Chemistry, which I read a few months ago and loved.  It's a contemporary twist on the downtown boy/uptown girl love story that feels completely fresh.  Alex (or Alejandro) and Brittany go to Fairfield High School, where the children of wealthy Chicago suburbanites mix with poorer Hispanic kids.  Through a twist of fate, Brittany and Alex are paired together in chemistry class and forced to work together.  Despite their initial anathema, the two quickly discover that chemicals aren't the only thing with chemistry. *wink wink* 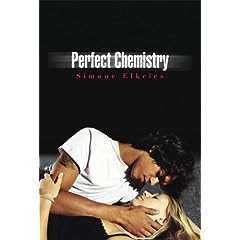 Anyway, really bad puns aside, this book was fun to read, had great characters, was very romantic, and also dealt with a lot of substantive issues like gangs, developmental disorders, and teenagers having sex (*gasp!*).  I can't say enough good things about it, so I thought for my first author interview, it would be great to talk to Simone Elkeles about Perfect Chemistry:

Thank you so much for taking the time out of your schedule to do an interview with me.  I read Perfect Chemistry in January and it is definitely going on my short list of favorite books of the year.

Perfect Chemistry takes place in a North Chicago suburb, and it says in your bio that Fairfield is loosely based on a suburb near your hometown.  Were the class divides as sharp in your own high school as they are in Fairfield High?

First of all, thank you for liking Perfect Chemistry so much!  I loved writing the book and the characters.

Unfortunately, my high school did not have a diverse population.  The school that I based Perfect Chemistry off of is Highland Park High School, which was our rival school.  In my opinion the class divides are pretty sharp there.  On one side of town there is a high Hispanic population, and on the other side is people living in mansions on Lake Michigan, but they all go to the same high school.

One of the secondary characters who is really memorable in the book is Mrs. Peterson, the chemistry teacher.  Did you base Mrs. Peterson on yourself?

Mrs. Peterson is partly me...I guess there's a little bit of me in every character I write.  Mrs. Peterson, actually, is a lot of teachers I had growing up...fun, but tough.  A few teachers I had really challenged me to be the best I can be (whether I hated it or not).

Secondly, Alex--he is undoubtedly my favorite character in the book.  He's so well-drawn and totally believable as a macho guy who’s more sensitive than he lets on.  Is it difficult for you to write from the male perspective?

Changing tone a little bit, there are several scenes relating to gangs in the book, because Alex is a gang member.  In the acknowledgements, you thank a police officer for teaching you about gangs and challenging you while you wrote this book.  How did she challenge you?  Did you start writing the book with some assumptions about gangs that turned out not to be true?

The police officer I know worked in a very dangerous gang neighborhood at one point.  She saw horrific events and even got beat up by gang members. In her words, "No way could you convince me a gang member can be a hero of a book."  That challenged me not to take Alex's life or situation lightly.  Even though my book is total fiction, her words made me make Alex not all perfect (he carries a gun and gets in fights, and even collects money for drugs...NOT heroic things) and I definitely didn't want to glamorize gangs.  It's a tough world out there, especially for teens in gangs.  I knew that, but maybe in my first draft I didn't portray it as such.

That's interesting.  I think the gang side of Alex's life is definitely not glamorized, partly because he's so conflicted about what he's doing.  Do you think that's what Alex and Brittany have in common--that they're pulled in two different directions?

Some questions about writing… first, how much do you know about the characters and plot of your book before you sit down to write it?  Does it come to you as you go along, or is everything pretty much fleshed out in your mind before hand?

When I sit down to write, I have a vague idea what the book is about and then I just start writing. It's exciting because I have no clue what happens before I write it.

Second, I get the sense that you do a lot of research for your novels.  Do you think there’s ever such a thing as too much research?  Is there some sort of line that you wouldn’t cross in the name of research?  I know you went to a jail for one of your earlier books, Leaving Paradise.

I do just enough research for my books that I think I need to make my story seem authentic. I wasn't about to live or hang with gangs, though.

Okay, now for some just-for-fun questions.  You've said several times that you're a fan of the Twilight series.  Are you on Team Edward or Team Jacob?  Have you thought about writing a paranormal novel?

I have to be honest and say I'm a Twilight fan, but I'm not a fan of the entire series.  I loved the forbidden love story in Twilight, but I wasn't a fan of the love triangle aspect to it which pretty much dominated the last three books in the series.  In my eyes, once you know who your true love is, that's it...you'll do anything to be with that person and nobody else should be an option.  That's just me.  So I'm definitely an Edward fan all the way (although if I watch the movie New Moon, I have a feeling I might become a Jacob fan.  I have a feeling that Taylor can change Edward fans into Jacob fans...only time will tell.)

I would love to write a paranormal novel, but I'm just not sure I can pull it off.  I might try it one day, but it's not in my near future plans.  I do have a time travel idea I'd like to write.

Okay, one last question.  You've been to Israel several times, and the books of your How to... series are set there.  Do you have any favorite foods or drinks that you like to have when you're there?  Or favorite places you like to visit?

I love the dessert Crembo - it's like a marshmellow with a cookie bottom dipped in a hard chocolate shell.  Since it melted, they only have it in winter in Israel.  My husband and I like it so much, we named our dog Crembo.  People have no clue what we're saying, they think our dog's name is "Crumble" and I tell them, "It's like Creme Brule, but Crem-bo" instead.

You can't beat the pita in Israel...it's chewy and has just the right fluffiness (I made up that word).  And if you ever go to a falafel stand, they shove these specialty salads (not lettuce...other types of veggie salads) in the pita along with the falafel, and it's amazing!  I have to say their spaghetti is really weird - it has a hole in the middle like a straw.  Not my fave.

I love to visit the Golan Heights, and Masada, and the Dead Sea.  I haven't been to Jerusalem in a while, but I remember being awed by the history at the Wailing (Western) Wall the last time I was there.

Thank you again so much for taking the time for this interview, Simone.  It was great for me to ask you questions about Perfect Chemistry.  Is there anything you want to add about your current or upcoming projects?

I just want my fans to know that the sequel to Perfect Chemistry will be coming out spring, 2010. It will be about Carlos - Alex's brother.  And I'm excited for How to Ruin Your Boyfriend's Reputation to come out in November.  I love hearing from fans, so if you like any one of my books email me off my website at www.simoneelkeles.com.

Thank you, Simone, for going out of your way to do an interview with me!  Check out the promotional video from Perfect Chemistry and keep an eye out for Simone's next book.


Check out Perfect Chemistry at Amazon

Check out Leaving Paradise at Amazon

Look at How to Ruin a Summer Vacation on Amazon

How to Ruin My Teenage Life on Amazon

Simone's next release, How to Ruin Your Boyfriend's Reputation, on Amazon