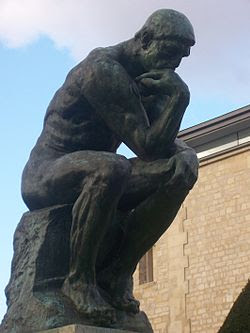 What would you definite as a "classic"? Is it just something old, or is there more to it? Something that's instantly recognizable, that one is immediately familiar with? Or something that defines a time period or generation? Furthermore, who decides what is and isn't a classic? Art history is very self-reflexive about who decides what is "great art" and what isn't, but what about literature?

I've always wondered about that and about the people who make lists of classic literature. How do you edit that? What are your standards? And most importantly, why should I have to read it?

I started thinking of this when I read a post about how "most bibliophiles would love to read the so-called classics of literature." I considered it even more later in the week because of all the examples of bookish snobbery that have been popping up lately on various blogs.

While I admire the promotion of difficult reading material and challenging others to read outside their comfort zone, I disagree the one should read books just because they're classics. I don't think most bibliophiles--or most anyone--would love to read most classics. Like Proust. You must be kidding me. No, what people who love to read want to read are books that speak to them, entertain them, illuminate them--something they can connect with. A whole different world they can sink into. That's what makes people enjoy reading in the first place. Even English class, which can occasionally feel like an indoctrination machine, is not supposed to be torture or rigmarole or history. It's a class on how to appreciate books and stories, and where you figure out what kind of books you like to read.

In an ideal world, classics would be reads that were guaranteed to involve and inspire readers. But as we all know, no reader is the same, and no two readers--even if they have very similar tastes in books--will necessarily like the same thing. When you don't enjoy a classic, it becomes either a historical curiosity or a torture device--or both. If you don't enjoy a classic book, why would you want to read it? You wouldn't. Yet I, as a lover of books, am supposed to read something just based on the fact that it is a classic?

What I'm trying to say in a roundabout and not entirely effective way is, classic literature is just like regular fiction today. In fact, what is and isn't classic has more to do with us and what we like to read than the past. Classics aren't special, they aren't immutable. Charles Dickens wrote popular fiction. F. Scott Fitzgerald wrote popular fiction--soap opera-esque fiction, if you want to be completely honest about it. Jane Eyre was a trashy romance. So anyone (re: snobby indie bookstore sellers and uptight women in gyms) who looks down at genre fiction and thinks "literature" or classics are more worthwhile of being read than "trashy" paperbacks is not only proving they don't know what they're talking about, but also making a rather ironic ass out of themselves.

To me, the term Classic in relation to literature is completely meaningless. Does "classic" tell me what the book is about, what you appreciated about it, or why I should read it? No. It just tells me some anonymous person I don't know decided it was worthy of the "literature" tag.

Which leads me to my third train of thought (I won't bore you with four and five, I promise). When André Breton was working at a library, he used to get really bored and would read all of the old, neglected books of poetry in the storage section of the library (never underestimate a bored librarian). The poets he discovered there and loved--like Rimbaud--became inspirations to the Surrealists and are now considered classic, must-read French poets. So what if each one of us could create our own corp of classic books and authors? Books that we've actually read, that we feel are must-reads, and that don't--and wouldn't--appear on anyone else's Classic literature lists? Would those books become the classics of the future?

I think they would. And I think they will. Because when it comes right down to it, no matter what kind of books you like, all readers want the same basic thing from them: a good story. Great characters you can believe in. Escapism. Never apologize for a novel that gives you those things, because that's the gift that books are meant to give you.