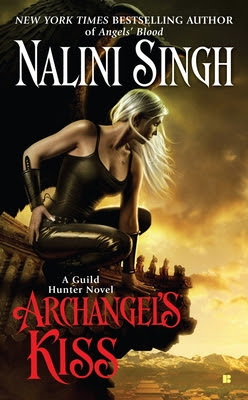 Archangel's Kiss is the second book in the The Guild Hunter series, after Angel's Blood.  I feel mostly same way about it that I did about Angel's Blood--only opposite.  Read on as I attempt to make sense of that statement...

Elena has come to accept her relationship with the Archangel of New York, Raphael (not that she had much of a choice), and is now closeted away with him in the angels' super-secret Refuge.  But not everyone is happy that a mortal has become so important to an archangel, and threats from the rest of Cadre--the ruling body of angels, of which Raphael is a part--soon start to roll in.  Lijuan, who is so old she is become death; and Michaela, for whom the phrase "that bitch is psycho" was invented, are the most obvious threats--but there's another angel in the Refuge who seems to trying to pit members of the Cadre against one another, perhaps to start an angelic war.  Meeeeanwhile, Elena is trying to rebuild her strength after her near-death experience, and she and Raphael share their childhood traumas and fuck like flying bunny rabbits.

I did really like the first half of this book.  It's very well-written, drawing you into the story immediately.  I think even if you hadn't read the first book, you would have no trouble getting into the story and figuring out what's going on here.  I also liked the fact that we finally got to understand more about Elena's and Raphael's pasts.

That being said, it all started to get reeeeeally really repetitive.  By the time the plot finally got going, I didn't care that much anymore, and the big ball at Lijuan's felt anti-climatic.  I think this book could have benefited from some serious slash editing--100 pages less would have told the story just as well, if not better, and I wouldn't have lost all my patience with it by the end.

So, as with Angel's Blood, I'm not sure I can really say I enjoyed reading this book.  Unlike the previous book, however, with this one I enjoyed the beginning and was annoyed with the ending.  I'm not sure I'll be picking up the next book in this series, since the set-up so far seems predictable:  every single archangel with the exception of Raphael and Elijah are bat-shit insane, and apparently at least one of them has to die in every book.  How long is this going to go on?  Until Raphael rules the world?  Come on.