Lord of the Night by Susan Wiggs 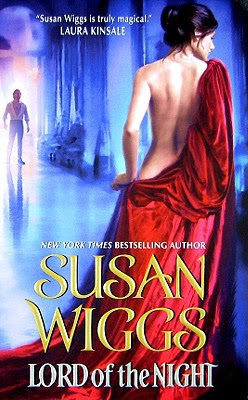 Sandro Cavalli is the Lord of the Night, the leader of a group that investigates crimes in 16th-century Venice.  One day he drops by the studio of his friend, Titian (yes, that Titian), and meets the maestro's latest model, courtesan-in-training Laura Bandello.  But Laura's true ambition isn't to be a courtesan--it's to be a famous painter like Titian.  Uptight Sandro is immediately attracted to the beautiful Laura, blah blah blah, plus there are a bunch of murders.

The first part of this book was actually pretty good, even though I was bothered by how objectified Laura was.  Sandro is literally old enough to be her father (he's 39 when the story takes place, and mentioned he was 21 or thereabouts when his wife died, so his kids have to be older than 18-year-old Laura--a fact the author glosses over), but for some reason there wasn't much of an ick factor there.  The couple does have chemistry and Wiggs definitely knows how to set up anticipation for a scene and then change it up enough to keep people reading.

However, in the second half of the book, the motivations of the characters started to fall apart.  They seemed to act suddenly and with no reason other than to create conflict and drag the book out.  Sandro's uptight personality and fear of feeling any emotion is never explained, and it really should have been--the guy is Italian, for god's sake!  Did his mom drop him on his head when he was a kid, or what?  Also, the solution to the murders was painfully obvious, and that tried my patience, especially at the end.

I still enjoyed this book, though, for the hugely redeeming factor of the setting--Venice!  I have to applaud Wigg's research into the time period, and she did a decent job of bringing the city to life.

BUT--speaking of research, I had huge issues with the art in this book.  I do have to give the author props for lifting the first scene straight from Titian's Danae (or at least one of them), but all the descriptions of the paintings sounded like they were lifted straight from an art history textbook, which was pretty jarring.  What really made me snort in disbelief, though, were Laura's paintings--Impressionism, really?  Uhhhhhhg.  Aside from the pure ridiculousness of it, anyone who'd seen an Impressionism painting and an Old Master work side by side would know that crap would never fly in the sixteenth century, when painters were actually expected to have, you know, skills (note to my boyfriend:  I use the term crap in the most affectionate way possible, haha).  But realistically I know this would bother few people other than myself, so disregard.

For an old-skool romance novel (it was originally published in 1993), Lord of the Night holds up pretty well.  But it could have used tighter editing, especially in the second half, and I was left with the feeling that it could have been a lot better.  That being said, if you want a mini-vacation to 16th-century Venice, this book is a guaranteed ticket.