Perchance to Dream by Lisa Mantchev 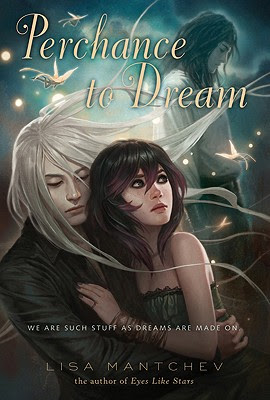 I adored Lisa Mantchev's first book, Eyes Like Stars, and was SO happy when Pam from Bookalicio.us generously offered to let me borrow an ARC of the next book in the series, Perchance to Dream (a gigantic thank-you to her, by the way:).  Although I didn't think it was quite as good as Eyes Like Stars, it was still a fast, fun story that left me feeling like I'd barely caught my breath before something else happened.  And isn't the cover gorgeous?

Perchance to Dream starts shortly after Beatrice, Ariel--the air spirit from The Tempest--and the fairies who are Bertie's best friends leave the Théâtre Illuminata, and it begins with a bang.  Both Nate (Bertie's kind-of boyfriend who is a pirate and has a single line in the The Little Mermaid) and Bertie's long-lost father make an appearance well before page fifty, and things keeping moving at a breathless pace for most of the book.  Although Bertie is out of the Théâtre and in "the real world," it's a world that is just as magical and fantastic as the one she left, and she still has the power to change it by writing her stories.  This only seems to complicate things, however, as Beatrice is constantly pulled from place to place in her search for Nate, her father, the Sea Witch, and cake for the fairies.

The novel starts to slow down after Bertie and her troupe of players run into a traveling circus, however, and the ending was simply a mess.  Of course, I was completely exhausted while I was trying to read through it, so that might have been why it seemed so nonsensical--but it was also the exact same type of climax that was in Eyes Like Stars.  Not only did I not think that was appropriate to the story (seeing as how they're no longer in a theater, hellooooo), it's quite frankly starting to get formulaic.  In fact, the whole fantasy world of this book didn't feel as cool or believable in "the real world" as it did in the Théâtre Illuminata--I still have no idea what the rules or boundaries of this world are, and it seems to have even less of a connection to the real real world than the Théâtre did.

By far my biggest frustration with the book, however, was the so-called love triangle between Bertie, Ariel, and Nate.  Ariel is the more interesting character, for certain, but I started to lose interest in both him and Nate during the course of this novel.  Bertie doesn't seem to feel much for either of her beaus, and I have to wonder why they're even included in the story at this point.  Plus, I felt really bad for Ariel because Bertie treats him like shit and he still comes back for more--all I wanted was for the poor guy to be put out of his misery.  At the end of the book, absolutely nothing is resolved on the romance front other than the fact that Bertie is bad news--we don't learn anything more about Ariel, who was very mysterious and independent in Eyes Like Stars, or Nate (who doesn't have any deep dark secrets anyway).

Overall this book was good--I was so happy to read it, and I do recommend it.  But I can see the series getting old pretty fast, and Mantchev really needs to start upping her game and shaking things around if she's going to keep it fresh and interesting.