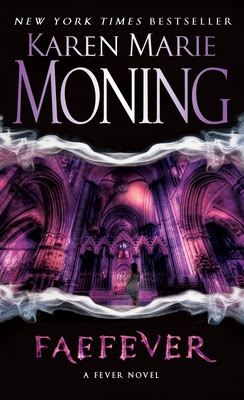 This is the third book in Moning's -Fever series.  Colette from A Buckeye Girl Reads likes to say that every series has that one book where you feel like the author is just killing time and nothing much happens--well, for me that was this book.

Basically everything of any significance that occurs in this book happens during the last 50-ish pages, so I can't really give you a summary.  Mac is still searching for the Sinsar Dubh and still fighting with V'lane, Barrons, the other sidhe-seers, and Inspector Jayne.

Mac's relationship with Barrons and V'lane develops more in this book, but at this point I'm thinking her and Barrons are never going to get together.  Seriously, those two have got way too many issues.  And V'lane is still pretty boring.

This novel wasn't really bad--it's just that not much happens during it.  The only character I really care about is Barrons, so when he's not in the book I get pretty impatient with it.  That was actually true in the other books, too, but in Faefever it was exacerbated by the opening line, "I'd die for him."  Naturally, I was hoping the him in this scenario was Barrons.

Mac, meanwhile, annoyed the crap out of me.  I find her distrust of Barrons unreasonable, and the way she tries to play everyone off one another is not only distasteful, but incompetent.  If you're going to be a manipulative bitch, at least know what the heck you're doing.  And don't even get me started on the jars of Unseelie.  Gross!  No wonder Barrons doesn't want to kiss that mouth.

That being said, there were parts like I liked--the MacHalo was hilarious, and Barrons' birthday scene was priceless.  But most of the book was watching MacKayla dig herself deeper and deeper into a hole.  And the ending was just depressing.

I am of course looking forward to book four. :)