Musical Notes: The many weeks' worth edition 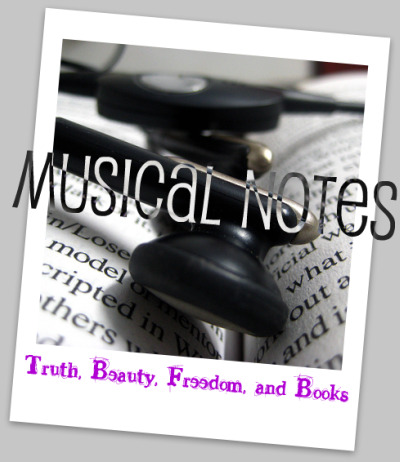 It's been a while since I did a Musical Notes post, mainly because I've been working 50+ hours a week.  This not only slowed down my blogging, but my reading--meaning I didn't have many books to talk about.  But now I've managed to collect several songs to go with my reading, so enjoy a few week's worth of musical notes!

The House on Tradd Street

This book takes place in Charleston, and when the characters went out to eat I kept imagining this being played by a band in the restaurant:

Was Pocahontas really Southern? I don't think so, Tim!  Moving on...

This song immediately started running through my head when I picked up Faefever.  Bonus reason to post this: I found this video where Bob Dylan looks like Adam Sandler!

The lovely Pam from Bookalicio.us let me borrow this book.  I think the drama of Arcade Fire goes perfectly with Beatrice's troupe of players.

Maybe it's just because I downloaded OK GO's new album this week, but I think this is a very good soundtrack to this book.  It's a little too perky, admittedly, but it seems to capture the same themes... right?  Hmmm.

Priceless line from this song: "Nothing ever doesn't change, but nothing changes much."  Deep, man, deeeep.