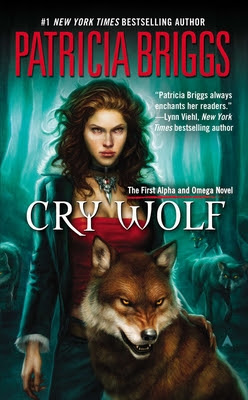 I am a long-time Patricia Briggs fan, ever since The Hob's Bargain.  I think she's a brilliant story-teller and really one of the best fantasy writers out there.  That being said, I haven't read her books in a long time because... I don't really like the Mercy Thompson series at all.  I know there are people out there who love it, and I'm glad Briggs is getting a lot of attention and press with it, but ever since the first book I haven't seen the appeal at all.  Maybe it's Mercy, maybe it's the genre, but I have absolutely zero interest in continuing to read it.  I'm finally admitting it!

One of the parts I did like about the first Mercy book, however, was when she visited the Marrok's pack in Aspen Creek, Montana.  So when a book about that pack, Cry Wolf, came out, I bought it--with admittedly low expectations.  And it's been sitting on my shelf for about two years since, which is stupid because I really loved it.

Cry Wolf is the continuation of a short story Briggs wrote for On the Prowl--which I haven't read.  Being thrust into the narrative without that background reading is a little disorienting, but the basic facts are quickly apparent:  Anna, an Omega werewolf, has been physically and sexually abused by her Chicago pack ever since she was turned against her will three years ago.  After finally calling the Marrok (the leader of every pack in the U.S.) for help, he sent his son and enforcer, Charles, to Chicago.  Charles killed the leaders of the pack and also mated with Anna.  Now they're off to Montana to live happily ever after.  But once in Aspen Creek, some interesting things start to happen.

One of the things I loved about this book is that I can totally picture Aspen Creek as a real town.  The sense of place and community is so convincing that I went to bed just a wee bit paranoid about any witches that might be wandering around.  I also loved that the werewolves are more human than wolf--I'm not a big fan of werewolves in fiction, but these characters are so easy to relate to because they are basically human.  Or at the very least they have human emotions and motivations.

The most fascinating character by far is of course Bran--the Marrok.  He appears a little bit in the Mercy Thompson books, but here we learn much more about him.  He's not what one would expect from an Alpha werewolf so strong he can control all the packs on an entire continent, at least not immediately; but that only makes him more attractive as a character study.

Finally, the way Briggs tell this story is really excellent.  At first it seems like a pretty simple plot, but then it veers in a direction I didn't expect at all.  Really the story is all about love and relationships, betrayal and trust--of others and of oneself--which are my absolute favorite themes.  Even if the book hadn't appealed to me on that level, it was such a quick, engrossing read that I would have devoured it anyway.  I easily stayed up until 5 in the morning finishing this, after working all day, and it's been a long time since a book was such a good read it made me do that.

So in case you can't tell, I loved this book and highly recommend it.  I can't wait to return to Aspen Creek and see what all the characters are up to!