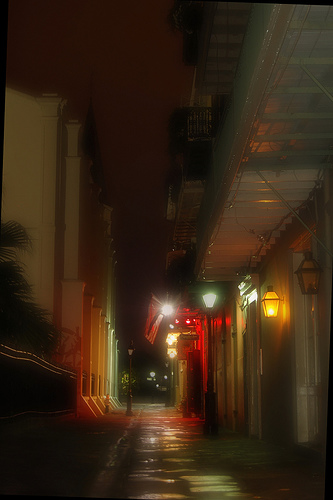 Last week, I listed a few books in one of my favorite cities, Venice.  This week, I'm moving on to another favorite setting, New Orleans.

Las Vegas might aspire to calling itself Sin City, but the hold New Orleans has on the American imagination makes it much more likely to lay claim to that title.  Because of its history, NOLA is unique--romantic, fun, and curious, but also dangerous.  Fictionally speaking, it's a place where anything might happen, and it seems writers definitely take advantage of that.  Here are a few books I remember reading that are set in New Orleans:

Be My Baby by Susan Andersen--This is one of my favorite contemporary romances of all time!  It's one of those typical cop-meets-uptight-broad stories (which I confess I have a fondness for), but the setting makes it ten times more fun than average.

The Dark Hunters series by Sherrilyn Kenyon--A good portion of the Dark Hunters books--a series about old guys with fangs who kill vampires--are set in New Orleans, although not all of them are.

Immortals After Dark series by Kresley Cole--This is another series with vampires, although it's Valkyries who have a compound near New Orleans.  I wouldn't say the setting plays a big part in the books, however.

More Than Magic by Kathleen Nance--Another romance novel.  This one is about a djinn who is summoned by a woman... I forget why.  It's actually pretty good, despite the cheesy cover.

Pelican Brief by John Grisham--The only parts of this book I remember take place in New Orleans.

Thigh High by Christina Dodd--I really liked this book about a bank robber who's working with an uptight woman to create a more secure bank.  Or something like that.  To be honest I totally forgot this book was set in New Orleans until I did a keyword search, or even what it's about.  But I do remember liking it, I swear!

Ruined by Paula Morris--This is a book I didn't like.  But if you're into NOLA, there are a lot of fun descriptions of the city and the culture.

A Streetcar Named Desire by Tennessee Williams--I haven't read this play, but I saw the movie.  Does that count?

Do you have any favorite novels set in New Orleans?