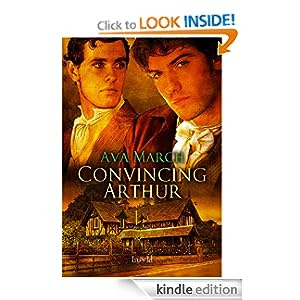 Leopold Thornton, "Handsome as sin and wicked as all hell," is a total slut. But! There's a good reason (well, a reason). Ten years ago he was going to profess his love for Arthur Barrington, attorney at law, but someone else beat him to it by, like, minutes. Now Arthur has finally broken up with the cheating bastard, and Leopold has one weekend at his country estate to convince him they belong together.

This novella is really delightful and well-crafted. The two protagonists--brooding Leopold and conservative Arthur--are character tropes, but they feel unique and authentic. Arthur is a workaholic who has never felt like he's been fully accepted by anyone--indeed, he's never expected to be. His only ambition in a relationship is to "find an amiable man with similar interests and goals in life." Aim high, dude. Leopold, meanwhile, is an extremely high-strung individual. One could say that he has the same acceptance issues as Arthur, but being the youngest son of a wealthy and titled family precludes him from working, so he anesthetizes himself with alcohol and sex instead of work.

Like the other m/m novellas by March that I've read, Convincing Arthur has a lot of sex in it. And the sex scenes are super-hot. But they don't feel gratuitous because the sex really does advance the plot and the development of the characters. Honestly, I think March is one of the best writers of sex scenes in fiction right now.

I also loved the way this story was told. The narrative flowed perfectly and had me really nervous at the end, when I honestly didn't know whether Arthur would agree to stay with Leopold or not. I really wanted these two to be together!

After reading a few books by Ava March, I don't think you can go wrong with her. She writes novellas that are absolutely perfect for a fun, quick, escapist read. I'd recommend her whether you're a fan of m/m romance or not.