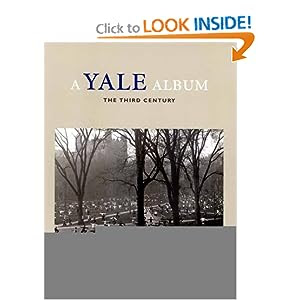 As indicated by the title, this is a photographic history of Yale University from the nineteenth century through the 1990s.

To be honest, I wasn't expecting much from this book. I ordered it for a research project I was thinking of doing, but then lost interest in. I figured I might as well flip through it before I returned it to the library, and was surprised by the amount of great information and great photography that was contained in its pages!

For someone from Colorado, Yale seems pretty highfalutin. So you can imagine my surprise at seeing the nineteenth-century photographs of the university, which show practical, blocky buildings; tiny classrooms packed with cheap, very worn seats; and descriptions from undergrads stating they came to Yale expecting "an assemblage of Parthenons and cathedrals" and instead getting "rather dingy halls, [and] boxes...." Why, that sounds like the university I went to! 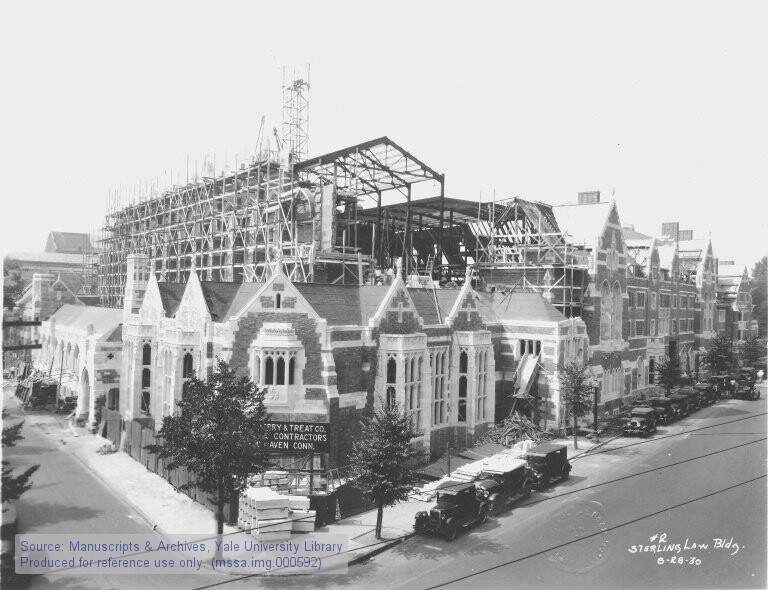 The architecture we now associate with Yale only came about in the twentieth century thanks to generous financial gifts and support from New Haven. This is the "New Yale," and includes iconic buildings like Sterling Memorial Library and Harkness Tower. The stone facades were artificially aged to look like they'd been standing since Yale's establishment in 1701 and hid the real architectural foundations, which consisted of twentieth-century-style steel construction.

The book isn't all about Yale's architecture, though; it's also about the "college experience" and how the university developed key aspects of its institutional character. There's an entire chapter on the arts, which is very interesting, and Paul Mellon looks super-nice and I want to give him a hug. There's also an entire chapter on the development of the library, which the book mentions frequently and definitely treats as the centerpiece of the school.

To be sure, this is a very pro-Yale narrative. Even the secret societies are painted as traditional and supportive rather than über-creepy (they still seem creepy, though--sorry, Benson); and unless you're specifically looking for it, you'll probably miss the fact that female undergraduates weren't accepted into the university until the '70s. The freaking nineteen-seventies!!!! Behind the times much, Yale? Although there is one picture of a black arts student and one or two of Asian students, I don't think anyone will be surprised that the portraits in this album are mostly of white males, despite the book's claim that, "the earlier conservative nature of the [university's] population had been transformed" in the 1960s. Yeahhh, still don't see Yale as a center of non-conformity, sorry. But going to Yale still looks like a total blast!

In spite of its one-sided nature, I think this book is great. It really does give one a sense of what going to Yale has been like through the last 100-ish years. The pictures are evocative of a privileged collegiate experience, and the descriptions are interesting and to the point. Overall this is a fascinating snapshot of one the US's greatest universities--minus most of the weirdness and snobbery that many might associate with it.

I definitely recommend this book if you have any interest in the subject.
at 12:43 AM