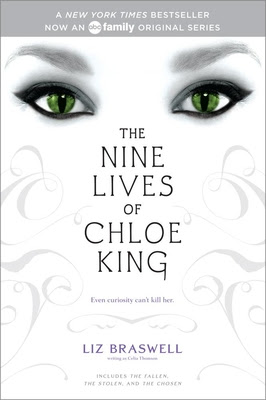 Chloe King is your average fifteen-year-old living in San Francisco with a single mom who also happens to be a high-powered attorney. BUT. Then she turns sixteen, and discovers she can't die, has claws, and can run super-fast. What is Chloe? Why are boys suddenly so interested in her, and why is she being attacked?

I was introduced to this series through the TV show, and was completely meh about it until this scene with Alek and Chloe a few weeks ago. Suddenly I became OBSESSED with getting my paws on the books. I drove all over town searching for it, finally found it, and then settled in to enjoy a major marathon session of teenage angst.

This 770-page book is actually an anthology of three books: The Fallen, The Stolen, and The Chosen (has anyone ever wondered why so many YA novels have those exact same titles?). The beginning is pretty similar to the TV series, with Chloe dying, gaining mysterious superpowers, and putting a guy in a coma just by making out with him, all before she has any clue as to what she is. However, the books differ from the TV show in significant ways. For one, Brian and Alyec's characters are quite different. Brian is even more lovably geeky, but he's also much smarter and keyed into what's going on with his dad and Chloe. Alyec is still the cool kid at school, but he's a flirt and not hung up on Chloe at all.

Both the books and the TV show draw parallels between Chloe gaining her cat powers and becoming sexually active, but in the books she is much more aggressive about it. Unlike TV Chloe, Book Chloe is upfront about how she probably shouldn't be dating two guys at once--but she's going to do it anyway because it's fun. Book Chloe is also much more independent and quick-witted than TV Chloe: she figures out she's a cat person on her own and gives herself training on how to use her superpowers. She takes control of the Mai, saves her friends and family, and takes down the Order. I wouldn't exactly call her a badass, but she's definitely more self-determined than TV Chloe.

As for the writing, Braswell does a great job of showing rather than telling. There is a ton of foreshadowing in the first book about Chloe's future "cat person" abilities, but it's subtle and probably not something you would notice if you weren't looking for it. Chloe gets very stressed out about whether or not she's killed Xavier, what's happening to her, and why people are attacking her; but instead of boring us all by spelling that out, Braswell lets the reader intuit it through Chloe's actions.

It probably won't come as any surprise, but I think the books are definitely better than show. Even though the TV series is actually pretty faithful to the books--especially in the casting of the main characters--the novels are edgier and, as a coming-of-age tale, more successful.


Musical Notes: Since this was three books in one, I think I deserve to pick out more than one song.