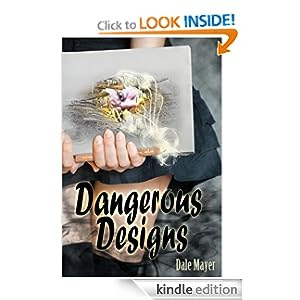 Story Dalton is a 17-year-old high school student trapped in a small town with no friends. All the people who lived there and shared her interests in art moved away except for her, and she and her mom are treated as outcasts thanks to her mom's hippie candle shop and Wiccan religion. So to put it bluntly, Story's not happy.

Then she finds a pencil on the ground and weird things start happening. She loses stretches of time. She can't concentrate in school at all, she can't stop drawing, and sometimes she finds herself trapped in an abandoned mine shaft on the edge of town with no idea how she got there. Luckily, the handsome new guy at school, Eric, is around to keep rescuing her. In fact, it's downright odd how he keeps showing up, almost as if he knows where she is.

Colette from A Buckeye Girl Reads recommended this book to me, and I'm really glad she did--it's totally up my alley. It combines sci-fi elements with YA romance and an artistically inclined heroine. The beginning was a little slow, but once I got about 20% into it, the story just flew by. It was really fun.

That being said, this is one of those books that Jane from Dear Author might say proves readers don't care about quality. I don't know if Dale Mayer has an editor look over her work or not, but if she doesn't, she needs one; and if she does, she needs to find another one. And possibly ask for a refund. This book is riddled with so many errors I had to stop highlighting all but the most annoying. Things like using too instead of to, it's instead of its, question marks where there should be exclamation marks, mixed metaphors, continuity issues, leaps in logic, using words incorrectly, and repetition. The mixed metaphors were probably the funniest of the mistakes--would you like to "come out smelling like a queen bee"? No? Okay then (I think Mayer meant "smelling like a rose" there).

Because of all the mistakes, I can't really call this book good. It's definitely not up to the standards I'd expect from a hold-in-hand book; and if it had been a paper book, I probably would have started snarling in annoyance and never finished it. I did honestly enjoy reading it, though, mainly because of Eric and his romance with Story, but also because it was just plain entertaining. It's a sweet story with some quirky geekiness thrown in, and I really identified with Story. I kind of want to give this book a hug (and I would, if it was a paperback).

I guess Jane is right and readers don't care about grammar, even picky readers like myself. What can I say, I guess my standards are lower for eBooks, especially self-published eBooks. The bare bones of a good story are there, but it doesn't have the focus to develop any larger themes, and it certainly doesn't have the polish of a novel published by one of the major NYC publishers. If you don't think that will bother you, then you should give Dangerous Designs a try. It's a damn site better than My Blood Approves, that's for sure.

Musical Notes: "Two Against One," by Danger Mouse and Jack White