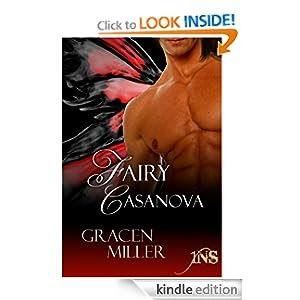 Sadie is lawyer who decides to treat herself with an anonymous hook-up in a Las Vegas brothel after she loses her job and her fiance in one day. Jace is the future king o'the fairies who wants to fulfill his dream of sexxxoring a human before being married to a fairy queen. Put these two in a hotel room and let convenient plot devices do their work.

This isn't the type of book I normally read at all. Did I buy it because the name Casanova was in the title? Because it was on sale for $2? Because I'd just drunk way too much and was really bored? MAYBE. However my purchase came about, this novella proved to be an edumacational experience.

Things I learned from this book:
I wouldn't call this book "good," necessarily. It was completely silly and ridiculous and there some INSANELY cheesy lines. It was fun, but was it worth $2? The jury's still out on that one.