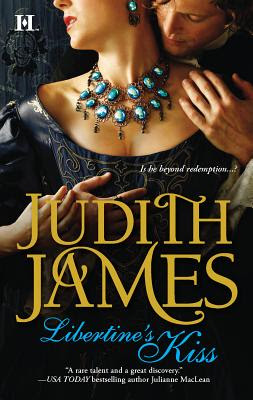 The Restoration court is definitely not a typical setting for a romance novel, even though--from what I've read in this novel--it has all the elements that make Tudor and Regency novels so popular. Great historical characters, dangerous exploits perpetrated by aristocratic young men, court politics, a charismatic and complex monarch, and a belief that pleasure should be found in the pursuit of earthly delights, all combine to make this a fascinating time period and perfect for an escapist romantic novel. However, Libertine's Kiss failed to satisfy my yearning for either romance or escape.

William de Veres is a Court poet, rake, former highwayman, and one of Charles II's closest advisers. When poor Puritan widow Elizabeth Walters shows up at Court, William immediately(ish) recognizes her as the woman who saved his life during Charles' exile, and resolves to help her get her lands back.

That part of the book was actually pretty good. I loved reading about the Restoration court and all the drama going on with Charles II's mistresses. The problem was the 100-page prologue before that part. You all know how I feel about about prologues. And if you don't, to wit: I hate them. I refuse to read them. And the longer they are, the more annoyed I get. This one was over a quarter of the book and the author didn't even have the courtesy to label it a prologue! HULK SMASH.

After I calmed down about that--which admittedly took a while--I started to enjoy the novel a lot. William is a great character and James does an excellent job of bringing this unfamiliar setting to life. I loved the proposal scene because it was such a guy thing to do. I also really liked the secondary characters, such as William's valet, Tom, and Elizabeth's cook, Marjorie. And of course HRH Charlie! Lizzie was a bore, but whatevs.

That was the middle. Then the ending came along, which was really abrupt and cheesy. So basically James excels at middles, but beginnings and endings? Not so much.

I don't want to slam this book too much, because it does have merits and a few great lines in it, and I do think it's great that James is writing about a time period other than Regency or Victorian England; but I can't help thinking this novel could have been so. much. better. if only James had edited the story down and told it in a more artful and interesting way. Instead, it's insanely linear and straight-forward. She put a lot of thought into William's character, and it paid off, but Lizzie is basically a walking a vagina for him to glom onto. So do I honestly need to know their entire backstory from childhood? NO.

Overall this novel was just okay. I can understand why some people absolutely adore it, but it hit a lot of my buttons and I personally didn't find it that romantic. I probably won't be reading the sequel to this.

Musical notes: "I'll Work for Your Love," by Bruce Springsteen