YA Scale of Hero Stalkerdom 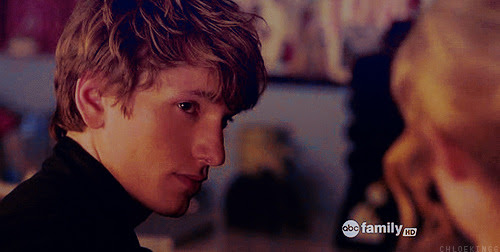 Chloe, I will stare at you creepily until you admit we belong together.

Once upon a time, if a guy liked you, giving you long brooding stares and following you around were considered not only socially acceptable, but romantic. Times have changed, though! Expressing any interest in another person is not only a sign of weakness, but liable to creep the object of your teenage affection out. To avoid this fate worse than death, one need to turn to YA novels in order to learn how stalkery one can get before a girl will call the cops.1


Staring is the number one sign that you are a stalker. Don't do it. Especially don't do it while your imaginary girlfriend is talking to another guy; this is liable to get you punched in the face. If you have to stare, use sunglasses or mirrors to disguise the fact.


Questions like, "What's your name?" "What are you doing tonight?" or "Where do you live/work?" may seem innocuous, but are fraught with stalkerish possibilities. What do you care where she's going? Are you her mother? Of course, to avoid an uncomfortable confrontation about why you're asking all these questions, you could always just look at her FaceBook page or follow her twitter account, but unfortunately this is just as bad. If not worse.


You've noticed your prey crush's physical existence and gained some basic info about her, so now it's time to make sure you two are in the same places at the same times. You might try driving by her house, sitting next to her at lunch, showing up at the same parties, or watching her sleep like a vampire bat. The latter is only recommended for actual vampires.


Despite your best efforts, you can't spend all your time with the girl (she does have to go to the bathroom on occasion), so to fill up the mind vacuum when you're not "sharing space," you're thinking about her. Perhaps even writing a song about her, or practicing a song someone's already written that uses her name in the chorus. PS-this level is also called "obsessing."


You've gained a more-than-acquaintances level of info, with or without her consent. You've shared several hours worth of space, even if said space was the cafeteria and you were on the opposite side of it. You've obsessed thought about her a lot and imagined the house you both will eventually buy and your future children. Now you're tired of thinking; it's time to make your move!

This is when the stalker boys are separated from the men. Planning and not going with the heat of the moment is the key. Under no circumstances is blurting out something along the lines of "We belong together," advisable. Unless you man up and take a chance you'll always be a stalker; but the trick is to make the YA protagonist believe it's all her idea. Aha, now you're thinking.


As you can see, YA romance is fraught with a minefield of possible mistakes. But if you use your noodle--and I mean that in every metaphorical sense--and progress intelligently through the five levels of YA Hero Stalkerdom, you too can get the girl, though it may seem beyond the scope of all possible outcomes. Just remember: true love may conquer all, but first you have to convince her you're not a stalker.