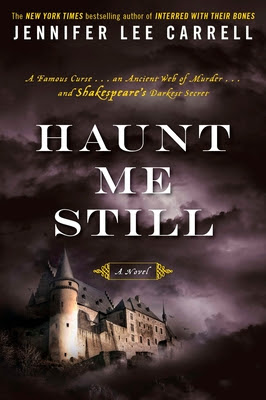 MacBeth: to this day, Shakespeare's most notorious tragedy. Legends of its malevolence haunt every production; scenes and lines from it are a familiar part of our culture--even to those who have never seen or read it. "Double double toil and trouble, fire burn and cauldron bubble," is one of the most recognizable lines in English wordsmithing, be it in a play, novel, or film. But most people don't know about the mystery and mythology surrounding the work. Is "the Scottish Play" considered cursed for a very good reason? Former Ph.D. student and current director of Shakespearean plays, Kate Stanley, is about to find out in an ill-fated getaway to Dunsinnan Hill, the place where MacBeth met his fate.

This novel is the second in a series of Shakespearean mysteries, the first being Interred with Their Bones. I really enjoyed that book, and overall I liked this one even more. It has the same Da-Vinci-Code-for-Literature-Buffs sensibility, and feels like a faster read. You don't have to have read Interred to get what's going on Haunt Me Still, but it will probably help.

Kate is invited to Dunsinnan Hill by Lady Nairn, formerly an actress famous for playing the role of Lady MacBeth, to direct the so-called Scottish Play. This being a mystery and all, things quickly start to go downhill, people die, an annoying teenager is kidnapped, and Kate has to travel hither and thither to find Shakespeare's original version of MacBeth before the kidnappers do.

This novel is full of magic, history, and cool discoveries. The part with John Dee's obsidian mirror being Aztec blew my mind. I learned so much about MacBeth from this book, and it really made look at the play in a new light. It's not just about the history of the play; it's about the incredible power art can have over life. MacBeth is scary not because of the witches or spells or evil plots, but because it doesn't stay put on the stage and then quietly folds back into storage once the production is over--it bites back. Or so theater legend would have one believe. Even outside of legend, it appears that the play was edited down significantly due to its commentary on contemporary politics, something Haunt Me Still also discusses, mainly through historical flashbacks.

As much as I enjoyed the history in this novel, the book isn't perfect. It does drag significantly in the middle, mainly because it feels like it's being set up as a country manor mystery (I'm a total sucker for those, by the way); but then Kate leaves the manor to go chasing after the manuscript and the story loses a lot of momentum as it switches gears. Also, the whole thing with Kate's former luhvahr Ben was just ridiculous, especially the ending. I'm so over him.

ANYway. Even when the pages weren't turning quite so quickly, I was thoroughly enjoying this escapist mystery. I'm not as completely in love with Shakespeare as I was at the end of Interred with Their Bones, but I am utterly fascinated by Scotland and John Dee! If you're the type who enjoys academic mysteries, then I would most definitely recommend this.

Fun video of the day: Blackadder encounters the curse of the Scottish Play: