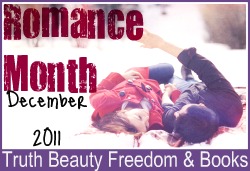 It's January, which--the last time I checked, anyway--follows December. That means Romance Month is over. Sadface. Thank you to all the people who wrote guest posts and read along with me this month! You deserve cyber cuddles, which sounds uncomfortable but is totally worth it. {{{cuddles}}}

In case you like lists, here are all the posts for 2011's Romance Month:
Counting the book I'm currently in the middle of, I read five romances and chucked seven mid-way through, which aren't the greatest stats in the world. I feel like I accomplished a lot more than that! I think I've become a very jaded romance reader at this point in my life, which is why there were so many DNFs. I really wanted my interest to be engaged and to be shown something new, and that didn't happen with a lot of the books I picked up.

I predict I will read more romances in 2012 than I did in 2011, but right now there are bunch of YAs calling my name. :) I hope you all enjoyed romance month as much as I did, and thank you again to everyone who joined in!