Weekend Cooking Review: WHAT I EAT by Peter Menzel and Faith D'Aluisio 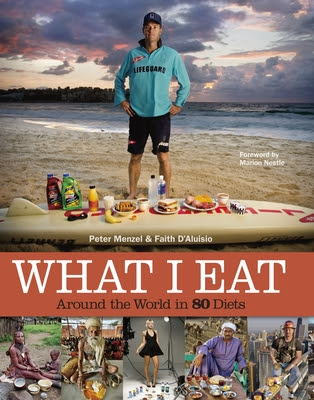 Several months ago, when I reviewed What the World Eats by Menzel and D'Aluisio, Amanda Gignac suggested I try out What I Eat: Around the World in 80 Diets by the same authors. Although it contains similar content--photographs of what people eat from around the world--Amanda was totally right when she said that What I Eat is a lot better than What the World Eats. It has better photographs, essays, and doesn't have as many generalizations or preachy moments.

In What the World Eats, Peter Menzel and Faith D'Aluisio photographed families from around the world with a week's worth of food, focusing on how much each family spent. Although it was an interesting idea, the format invited large generalizations. By comparison, What I Eat focuses on individuals and what they eat during the course of one day. This is much better, because it connects food more specifically to a person's lifestyle rather than their nationality. A trucker, for example, logically gets most of his/her food from gas stations and fast food restaurants and needs something that can be eaten one-handed; a German biermeister is obviously going to drink a lot of beer! 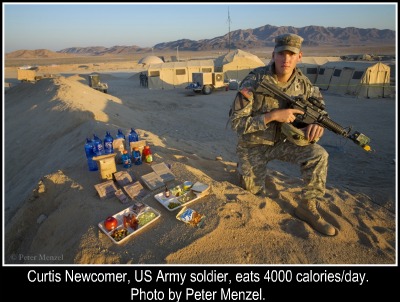 The book is organized by how many calories each person eats in a day. I really had no idea what the average calorie intake for an individual was before I started reading this book, but it seems like most people eat between 2200 and 3000 calories per day. Below 2000 calories is mostly athletes who need to be light (my aunt, a competitive rower, once told me she limited herself to 1200 calories a day during racing season--now I know just how low that is!), extreme dieters, workaholics who don't have time to eat, or people living in poverty. Even the fashion model Menzel and D'Aluisio photographed, Mariel Booth, eats 2400 calories a day. One might think that at the other end of the spectrum--people who eat 4000 calories or more per day--there would also be athletes who need energy. But actually, this group is almost entirely made up of men who work outdoors, particularly cold outdoors--with the notable exception of an English housewife who binge eats at 12,000+ calories.

If there's one thing I've learned from this book, though, it's that how many calories you eat doesn't necessarily have a lot to do with how much you weigh, despite what we hear on television. Viahondjera Musutua from Namibia eats about 1500 calories a day and weighs 160 pounds, while João Agustinho Cardoso from Brazil eats more than three times as much--5200 calories a day--yet weighs twenty pounds less! How many calories a dish has and how much food you're actually getting through it also seems to vary wildly: even though extreme dieters Rick Bumgardener and Mackenzie Wolfson eat less than 2000 calories a day, there seems to be a lot more food in their calories than there is in Chinese student Chen Zhen's 2600. 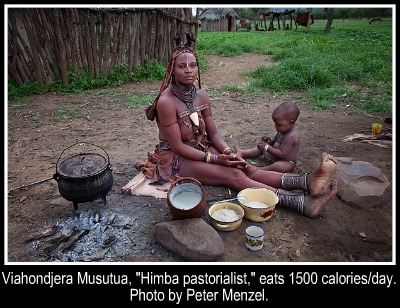 Part of the reason, as explained in Bijal P. Trivedi's excellent essay "The Agony and the Ecstasy of the Calorie," is that all calories are not created equal. When calories were "discovered" by Wilbur Olin Atwater in the 19th century, he was basically looking for a way to measure the amount of energy a person can get from food. But each calorie is made up of different values and behaves differently depending on what you do to it (processing, cooking, etc.), so what exactly goes into a "calorie" and how it will affect your body can be extremely variable.

There are several good essays in this book, which helps to mitigate the preachy tone I didn't like in What the World the Eats and elevates What I Eat to a more serious study of how humans relate to food. Trivedi's essay and Michael Pollan's "The End of Cooking," where he talks about the irony of America's obsession with foodie television and the fact that less and less people are cooking for themselves, were my two personal favorites.

Overall I found this to be a book worth tracking down and think it should definitely be of interest to anyone who likes reading about food. It would also be a great resource if you're planning a trip to any of these countries and want to find out what a typical meal might be.