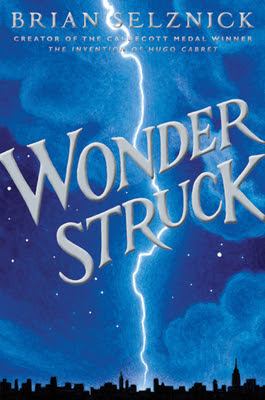 After reading The Invention of Hugo Cabret, was there any question of me picking up Brian Selznick's next book? Not really. Wonderstruck has very similar elements to Hugo Cabret: once again there's an orphan boy alone in a city, looking for answers about his father, and receiving help from another child. But in this case the setting is the American Museum of Natural History in 1977, not a 1930's Paris train station. Juxtaposed against Ben's story is that of Rose, a girl in 1927 New Jersey who runs away to New York City. Her story is told mostly in pictures. 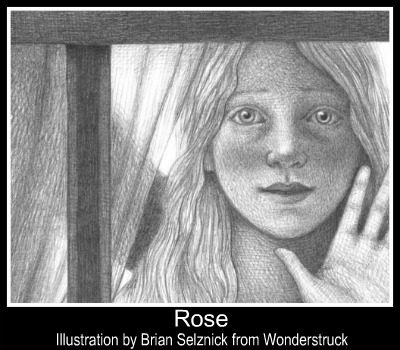 Wonderstruck isn't as charming and doesn't have the same fantastical feel as Hugo Cabret, possibly because the setting is much more modern and closer to home (at least for this American reader). But I also think the way Selznick tells this particular story is grittier and more grounded in reality than Hugo Cabret was. We're more directly confronted with the death of Ben's mother than we were with that of Hugo's father, and the tools and clues Ben uses to reconnect with his father's past are much more practical. That's not to say I didn't enjoy Wonderstruck, but the tone is definitely different. While we can imagine Hugo and Isabelle cavorting among the stars in the bright lights of Paris, these characters remain firmly in the gutter, so to speak. 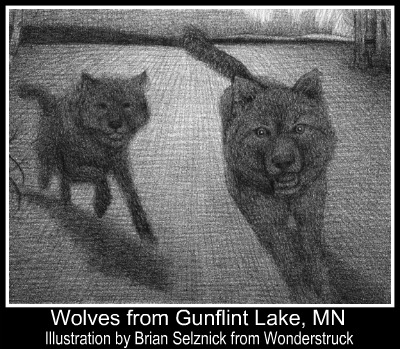 I loved the opening sequence of this book simply because it highlights what is so great about Selznick's novels: the illustrations aren't afterthoughts or superfluous, they really are an essential part of the book. In this case the illustrations at the beginning did a great job of pulling me right into the story, which I finished in about two hours. Selznick keeps you reading by switching between Rose's and Ben's story at the just the right moments so you want to find out what happens next, but not so often that you start to feel whiplashed.

One of the themes in Wonderstruck is that of collections and how they tell a story about the person who owns them. They're called mini-museums, and collectors are amateur curators. Ben owns a box filled with "treasures" that he carries with him and that reveals stories about his past. That made think about my own collections--to be honest I don't collect that much. I don't like spending money on things with no practical purpose; plus I never saw the point of gathering things that are just going to collect dust. The one notable exception is images--I "collect" images of St. George and the Dragon, for example, not by actually buying them (unless it's a postcard), but by writing down where I saw it and/or taking a photograph of it. It also seems like most of the trips I take develop image themes. The image theme for my trip to Washington DC, for instance, was boats. I suppose in a sense I am curating an museum of images in my mind, although I thought of it like that before.

In any case, I think this novel will inspire readers (adult readers, anyway) to look at their collections in different ways, and I do think it's a good book that's worth reading. I definitely wasn't disappointed.