Weekend Cooking Review: FED UP WITH LUNCH by Sarah Wu 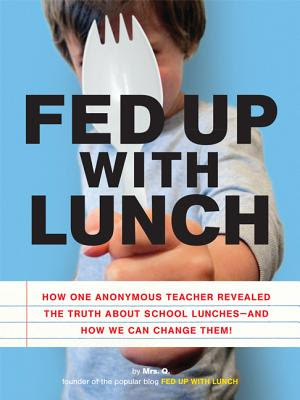 You know those people who tweet about what they had for lunch? Well, Sarah Wu made a whole blog about it and then turned it into a book! Blogging "undercover" as the anonymous Mrs. Q, the elementary school teacher mobile blogged pictures of her and students' lunches every day for a year, along with descriptions of what the food was, how it tasted and looked. What did Wu learn from her Supersize Me-like experiment?

I had never visited (or even heard about) Wu's blog, Fed Up with Lunch, until this book came out; but in the interest of learning more about the author and where she's coming from, I looked over her lunch posts. I can definitely see why Fed Up with Lunch is so popular--the blog is really fun and interesting. Most of the attraction lies in Wu's photographs, which aren't professional by any means, but offer a fascinating glimpse into another world. Because most of the food is prepackaged or an appetizing shade of brown-ish, you have no idea what it is until she tells you. The writing itself is really lively and vibrant, but also short--probably about 100-300 words per post. It's said food is a window onto a culture--if that's the case, then the culture of the Illinois school system is like something out of the Jetsons. Their lunches are really bizarre and look like they came out of a space port.

Don't expect any of that from this book, though. This is a memoir of how and why Wu started the blog and her experiences with it, including meeting Jamie Oliver (she had the good fortune to start her blog just as Oliver was airing Food Revolution), being interviewed for Good Morning America, and so on. The pictures of food, which are the heart of Wu's blog, are reduced to 1-inch-square images so small you can't tell what you're looking at, and Wu actually doesn't describe the food she ate that much at all (with the notable and horrifying exception of a peanut butter and jelly sandwich).

Wu states in her book that she felt like a journalist, and I can see that on her blog, but it doesn't translate to this book. If this book is journalism, it's of the fluff variety. She says up-front she's not a food expert, which is fine, but it also shows in that the book reads more like the ruminations of a mom on how we need to watch kids' nutrition, etc. etc. While that's certainly true, as a call to action it's not terribly effective.

There was one really good chapter in the book based on Wu's experiences in the food industry. She worked for Kraft for several years (something she only bothers to mention in chapter seven?), and talks about how food corporations need to show an increase in sales to keep their stock prices up, even though food consumption naturally remains steady. That was really interesting and explained a lot about how food is produced in America.

If you watched Oliver's Food Revolution, you're probably aware that communities' reaction to changing their school food system tends to be met with anything ranging from apathy to antagonism. This book certainly doesn't do any better job than Oliver's TV show at changing that attitude--I have to admit, I'm kind of stuck on apathy at this point. If anything, I'm less inclined to care than I was before, and Wu's really preaching to the choir when it comes to me! While feeding kids freshly-made gourmet meals in cafeterias sounds nice in the abstract, in the concrete I have to wonder if, first of all, kids will actually eat this food; and second of all, who's going to pay for it? Wu didn't persuasively address either question in this book.

If anything, this memoir is an argument for parents to take a more active role in learning about food and cooking freshly prepared meals in their own home. If a revolution begins at home, then Wu did so with her own life, and I think Fed Up with Lunch may influence other parents to do the same.

Weekend Cooking is hosted by Beth Fish Reads and is open to anyone who has any kind of food-related post to share: Book (novel, nonfiction) reviews, cookbook reviews, movie reviews, recipes, random thoughts, gadgets, quotations, photographs. If your post is even vaguely foodie, feel free to grab the button and link up anytime over the weekend.