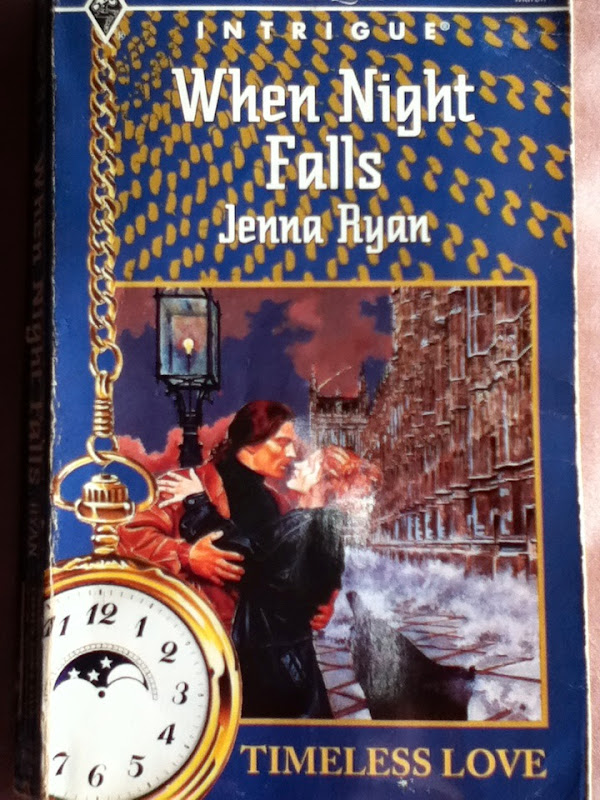 Remember a few months ago when I begged asked for help finding two books I'd read a really long time ago? Well, this was the first book! I actually found it!

When Night Falls was published in 1993, which means I was either 12 or 13 when I first read it, and my recall of the details was actually pretty spot-on. Cassie, a crime scene photographer in London, follows a mysterious figure from the scene of brutal murder, straight into 1790. The man she followed, Anthony Lazarus Morgan, is a butler in the house of a baronet--and in his spare time, he travels through time investigating crimes. It turns out the murders in Cassie's London were committed by Jack the Ripper, who is also a time traveler, and he's now in 1790. Dun dun dun!

I'm happy to report that this book is as much fun as I remembered. Here are some of the things I heart about this book:
Of course, there are some inconsistencies in the story I don't remember noticing when I was 12. Why is Morgan allowed at every crime scene and why do people keep asking his advice on how to investigate, for instance? I don't know! It's a time travel romance, maybe he altered time so that butlers are considered good crime scene investigators. It also bugged me that women of Georgian England kept being referred to as weak-willed and passive, especially when two of three Georgian-era females in this book were pretty damn bossy and clearly in charge of their own domains.

Overall, though, this is a pretty entertaining read. The romance is much more of a subplot than the mystery is, but it develops over the course of the novel and there's no instalove or -lust going on. Jack (the Ripper) also gets his own scenes, which are weirdly enjoyable because he's basically Norman Bates in the 18th century. I'm super-happy I found this book and I'm never letting it out of my sight again! Exclamation mark!

Musical Notes: There's really no logical reason for this, but "Walk Like a Man" by Frankie Valli and The Four Seasons kept running through my head while I was reading this.