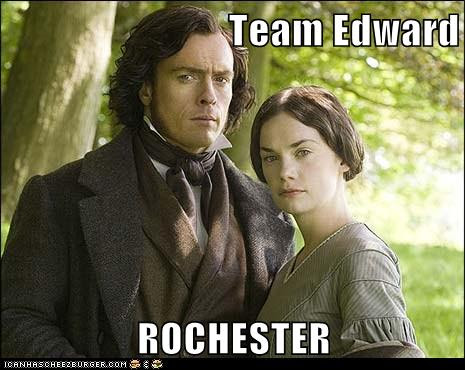 There haven't been a lot of Jane Eyre adaptations (thank god) when compared to other classic novels like Pride & Prejudice; but there are a few! Here are some I've personally come across:

Jenna Starborn by Sharon Shinn
Sharon Shinn is one of my favorite authors, and Jane Eyre is one of my favorite books, so you can imagine my excitement when I heard about this novel. If you just read the summary and not the book itself, it might seem like Shinn did a good job of adapting Jane Eyre to a sci-fi setting; but in practice I didn't see what the point of Jenna Starborn was, because it was so similar to the original.

Nine Coaches Waiting by Mary Stewart
This is probably one of the best adaptations I've read, although it still falls short of the original. One of the reasons it's good is that Stewart is a neogothic writer, so her writing style is already perfectly suited to an adaptation of Jane Eyre. Another point in her favor is that she definitely puts her own spin on the story and adapts it to a contemporary (at the time) setting.

Rebecca by Daphne du Maurier
Du Maurier is another neogothic suspense novelist whose style is perfectly suited to putting her own twist on Jane Eyre. Rebecca is more of an "inspired by" than "copied after" adaptation. Like Stewart, du Maurier lets her own characters and setting move the story, not the original Jane Eyre.

Jane by April Lindner (review here)
In this version, Mr. Rochester is a rock star. It's very Jane Eyre-lite, but was enjoyable, if totally ridiculous.

Jane Slayre by Sherri Browning Erwin
I've seen this book around and have managed to avoid it. I suppose I could be persuaded to try it if someone told me it was good, but I haven't seen any reviews of it.

The Flight of Gemma Hardy by Margot Livesey
This is another novel where I'm not really sure what the point of writing it was. It's very similar to Jane Eyre in the plotting, but with none of the great characters and emotions that come with the original.

Have you read any adaptations of Jane Eyre?