Proposed alternate titles: Bumbling into Bernini, A Lay with Lely 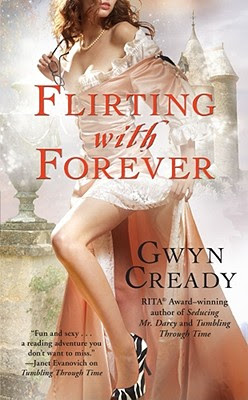 Cameron is trying to get a book about Van Dyke published (because god knows the world needs another one of those) so she can become the director of a museum. Problem: her publisher wants her to "sex it up." But how to come up with these gossipy stories about Van Dyke? Answer: make them up! And also: travel back in time and sleep with another painter who met Van Dyke twice!

I know what you're thinking right now. You're thinking, "That doesn't make sense." You are correct. Why didn't Cameron sleep with Van Dyke? It just worked out that way. She was sent to sleep with the time period of Peter Lely, the official English court painter after Van Dyke. And she and Lely have awesome sex and then she comes back to the present--how I don't know--yet still insists on writing a biography of Van Dyke; then Peter travels to the present and becomes a modern artist. And that's just the first half! I would expand on the plot some more, but trust me when I say it's not worth it.

Despite the nonsensical plot--I mean, it's a time travel romance, so what do you expect?--my two main problems with this book were Cameron and the writing. Cameron was the dumbest heroine I've encountered in a long-ass time. Her idea of original research is doing a book search on Amazon. To fact-check herself, she goes to wikipedia. When she realizes she's going to have to back up her "research" with documents, she instead just decides to say it's all made up! And her version of art appreciation is any painting that makes her wet. I am not kidding. Honestly, the idea that a person like this would ever be a curator at a major museum, let alone the director of it, is galling. And if she's an academic, I'm Happy Pants McGee.

Furthermore, don't EVEN get me started on the writing. Oh lordy! There were moments when I was just like, "WTF please stop!!! My eyes, they are bleeding!" Basically any attempt by the author to describe a piece of art was hi-lariously awful. But beyond that (art descriptions are usually pretty painful, anyway, so I just skim over them), there were times when this book did not make sense because it was trying way too hard to be poetic. For example, Peter is described thusly: "The gentlest crurve of cheek hung by the corners of his mouth, a signal of middle-age in an artist unafraid of such trivialities." LOLwat? His cheek was hanging off his face? That sounds a little more than trivial. At one point Cameron's thighs were described as amorphous white blobs and her nipples like bas-relief sculpture. NEED I GO ON???

All that being said, I did finish the book, and in one day (there's no way I would have spent more than a day on it). I think it comes down to the fact that this is every art historian's dream! Honestly, do you know how many times I've imagined what it would be like to meet Giorgio de Chirico or Manet in person? Too many times. And Cameron actually gets to do it--of course, the opportunity is wasted on her because she's a dumbass, but whatever.

Another thing I liked about this book was Peter Lely. He was a great character and really the only thing that kept me reading. His regret over and struggle to right past wrongs in his life made him the most believable and sympathetic person in a book filled with shallow, selfish idiots. Another character I liked was Jeanne, Cameron's assistant, because she used her brain instead of her vagina to make decisions. Hooray for non-crotch-based decision making!

So, right. Why did I read this? I don't even know anymore. It was a train wreck, but of the fun escapist kind. Even if it drove me bat-shit crazy.