Weekend Cooking: 100 RECIPES EVERY WOMAN SHOULD KNOW: ENGAGEMENT CHICKEN AND 99 OTHER FABULOUS DISHES TO GET YOU EVERYTHING YOU WANT IN LIFE

I know what you're thinking right now: that's a long title. And also: everything you want in life?!? But you want so many things! Can food really get you all that? No, no it can't. Or can it????

Anyway, who cares, there's no harm in trying, right? *cough* Let's start with the recipe this book is built around: Engagement Chicken. Basically a lemon roast chicken, but with the added benefit/detriment (you decide) of making men fall in love with their stomachs... or you, the book doesn't really go into specifics. POINT IS, make this chicken for a guy, and bam! he'll ask you to marry him. 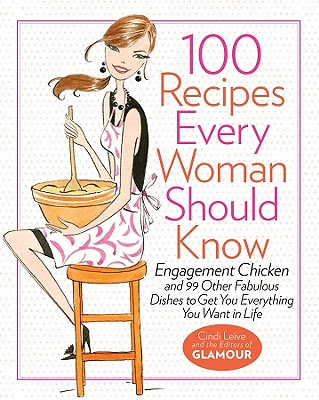 <--This is what I look like while cooking, fyi.

I had several issues with the centerpiece recipe of this book, mainly because it was just way too general. How many people have roasted chickens in their lifetimes? Not me. Even one of the Glamour editors who tried this recipe said she had no idea what giblets were (which definitely puts these recipes in a new light). Yet the book never actually explains what giblets are, or has any technical instructions at all. Are they contractually obligated not to say, "Yo, giblets are..." whatever they are? Because if YOU wondered what giblets were, it's a fair bet that your readers might, too. Also, I'm pretty sure roasting a chicken involves some sort of tying of the chicken legs. I'm not exactly sure why or how this is done, but I clearly remember a French guy doing it on Anthony Bourdain. Yet does the recipe mention anything about tying chicken legs together? Nope. So if you were a newbie cook who'd never roasted a chicken before, you'd just plop that sucker into a roasting pan and who knows what might happen!

The rest of the recipes--i.e., recipes from Glamour that they renamed to fit in with the theme of the book--are a mixed bag. I skipped the breakfast and drinks sections, because I don't mix drinks and I sure as hell don't make breakfast. There are a few must-tries, like "Perfect Host Lobster Pie," which sounds like it's ridiculously easy to make and incredibly decadent at the same time (love that concept); and "Complexion Soup," which is really just a carrot soup. But then there are other recipes like "Broke and Fabulous Grilled Cheese." In case you're wondering, yes, it is just bread and cheese grilled.

My favorite two sections of the book were "Sides" and "Cheap & Easy Meals." Who doesn't need creative ideas for side dishes? I'm always buying something that I think will be great, like brussel sprouts, and then wondering what to do with them. The sides section contains a "Kitchen Basics" insert that has five recipes for vegetable sides, plus four recipes for toppings you can use on any veggie. In fact, the inserts are definitely the best part of the book--they cover things like basic pasta sauces, $5 chicken dinners, and making the perfect cheese plate.

I think overall this is a pretty good cookbook, although the packaging just bothers me. I know it comes from Glamour, which is a woman's magazine, but did they have to market it soooo aggressively as a cookbook for women??? What if I want a guy to make Engagement Chicken for me to convince me to accept his proposal? No guy is going to pick this book up. This gives me a sad. Also, there's this strange dichotomy between a circa-1950s assumption that women are the ones who cook in a relationship ("Let's not forget the cook's needs when we're thinking about the guy's needs!" "Get the man in your life to make this for you--the recipe is that easy." Are you freaking kidding me right now, Glamour?), and the fact that it's obvious none of the editors of Glamour actually live like this (prima facie evidence, the editor who didn't know what giblets were). Do they think the women "in the middle," living between LA and NYC, do? Because that's... kinda dumb.

Anywhosie, despite that, the recipes in the book are worth checking out. I think this would be a great cookbook to give to anyone who's starting out in their first kitchen. And if it's a guy, well... I guess you could just copy them down for him?

Weekend Cooking is hosted by Beth Fish Reads and is open to anyone who has any kind of food-related post to share: Book (novel, nonfiction) reviews, cookbook reviews, movie reviews, recipes, random thoughts, gadgets, fabulous quotations, and photographs.