Nerds Heart YA: PAPER DAUGHTER vs WHAT MOMMA LEFT ME 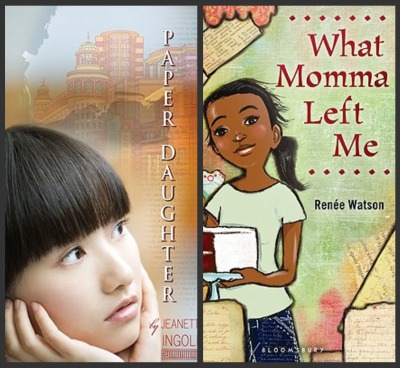 Nerds Heart YA is a bracket-style tournament for under-represented books in YA literature. This year I'm a first-round judge and the two books I read were Paper Daughter by Jeanette Ingold, and What Momma Left Me by Renée Watson. Only one of these books will move on to the next round of judging.

These books were great for comparison, because they both take place in the Pacific Northwest--Paper Daughter in Seattle and What Momma Left Me in Portland--and they deal with very similar issues. Both main characters, Maggie and Serenity, have recently lost a parent before their stories start, and as a result have to deal with issues of identity. They question who their parents were and what that means for them and their own life choices.

I have to say, I have considerable fondness for Paper Daughter, even though it takes longer to get into than What Momma Left Me. My absolute favorite scenes involved Maggie's internship at a newspaper, where she starts off doing everything wrong. I also found the world of the newsroom itself fascinating--who knew writing sports would require so much expertise?? Not me. That being said, the whole mystery with Maggie's dad seemed a little far-fetched; and even though I can understand why Ingold included the scenes of Fai-yi Li's life, they tended to interrupt the flow of the narrative.

What Momma Left Me, meanwhile, felt entirely authentic from cover-to-cover. I think this is due in large part to the characters, who felt like real people to me. I connected with Serenity immediately. Unlike in Paper Daughter, where I felt as if the teenager behaved too much like an adult, Serenity's feelings and experiences were true to that of a thirteen-year-old--from dealing with peer pressure to being attracted to the cute bad boy. Even though her life with her mom was wickedly depressing and messed-up, the way Watson told the story made me want to know every last secret that Serenity harbored about her family. I also think the writing style in Momma was very lyrical, and I loved the inclusion of poetry into the text.

So even though Paper Daughter was good, I was blown away by What Momma Left Me and am advancing it to the next round of competition. Renée Watson is a very talented writer and I'm happy I got a chance to read her work!

Curious to see what book will be competing against What Momma Left Me in round two? Check out Melissa's choice at Book Nut!