Book Review: THE INVENTION OF HUGO CABRET by Brian Selznick 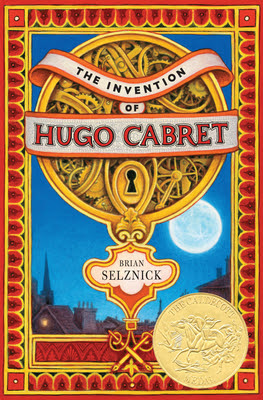 Hugo Cabret is an orphan living by his wits in a train station in 1930s Paris. His most prized possession is a mostly-broken automaton, which he believes carries a secret message from his father. All he has to do is fix the machine and he will know what to do next. When he starts stealing repair parts from a toy shop, however, Hugo unknowingly sets in motion a revelation of secrets for the toy shop owner and his family.

I first heard about this book from Sandy at You've Gotta Read This, and immediately knew that, yes, I did have to read it. It's like a graphic novel in that it's told with both words and pictures, but this isn't set up as a comic--it's proto-cinematic, the pages surrounded by black as if you're sitting in a theater, and includes not only illustrations, but film stills and photographs. The introduction states, "I want you to picture yourself sitting in the darkness, like the beginning of a movie," and the book is kind of like reading a movie--which sounds very awkward, but totally works.

The story is absolutely charming and sweet, but also intense. In a lot of ways it reminded me of Amelie. It's all about magic and dreams, but in this case the magic comes to the characters through movies and machines such as clocks and wind-up toys. At one point Hugo says machines are always made for a specific purpose, which is why broken machines make him sad--they represent unfulfilled potential. Similarly, unseen movies created by the machine of the camera have lost their purpose to entertain and transport people to another world.

I really liked the inclusion of Georges Méliès into the book, too, mainly because I already knew a little bit about him from a class I took on Cinema and Painting. In film studies, Méliès is kind of a Big Deal. According to Natasha Staller (another Natasha, yay!), Picasso was influenced by Méliès when he created his first Cubist paintings. There was also an exhibit all about Cubism's relationship to early cinema at the Pace Wildenstein Gallery in 2007. If you check out this interview Charlie Rose conducted with the curators and skip to the 19 minute mark, you can get a quick tour of the exhibit and see some clips from Méliès' movies.

This is a great book I highly recommend, especially if you love movies. Even though it doesn't take a long time to read, it has a lot of heart and a tiny, perfect little twist at the end. Loved it!