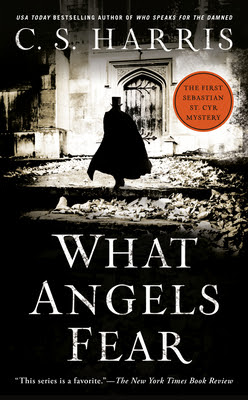 Nobleman Sebastian St. Cyr stands accused of murder in nearly-Regency England, and to dodge the charges he decides to investigate! With his two trusty sidekicks, Tom the pickpocket and Kat, the courtesan who broke his heart, he goes from this London house to that London house, and asks questions. And then he does it again. And again. Until the murderer says, "Lookie here, I'm the killa killa!!! Come and get me!" and then the light bulb finally goes off and Sebastian saves the day.

I've been hearing about this book from some of my favorite bloggers for years, and they all seem to love it. Unfortunately, I'm not quite as enthusiastic. I realized early on that this novel is basically a re-make of The 39 Steps, only set in the 19th century and 300 pages longer. You've got your dashing hero, with an uncanny ability to don disguises and escape pursuit, being accused of a crime he didn't commit and giving the authorities a merry chase, all while uncovering looming political plots and foreign spies. Except whereas Richard Hannay uses his wits to keep abreast of pursuit, Sebastian uses his nightvision and superhearing.1

Personally, I would rather have wit.

I actually really liked the beginning of this novel and the fact that I could identify what type of story it was right off the bat. It feels wonderfully atmospheric and Sebastian is honestly a pretty great character--although my favorite is Tom. He's a right plucky 'un! as I might say if I was in a production of Oliver. He's also ten times smarter than the guv'nor and could probably wrap this mystery up in 200 pages or less.

No, what got to me was that 1. this book takes itself way too seriously; and 2. the investigation became really repetitive. After Sebastian lines up the initial list of suspects, he just keeps visiting them over and over and over. I love it when the characters say to him, "Oh, you again!" (and they all do at some point). Yes, YOU... AGAIN. Maybe we should have been able to solve this thing a long time ago, hm? It felt like he was doing an awful lot of running around for zero information.

Furthermore, the political stuff is ridiculous, as it usually is. No one cares; it's the MacGuffin! But apparently the author thought I would care because she kept boring me with it. And then there's the ending, which did not impress me with its "moral ambiguity."

This isn't the worst mystery I've read, but honestly, I'd rather just reread The 39 Steps. Buchan knew what he was doing with that book. That being said, I'm willing to give the next book in this series a shot, just for the characters and the atmosphere--and the fact that the next book is shorter.


The jumping men make me lawl.