Book Review: THE GHOST OF GREENWICH VILLAGE by Lorna Graham 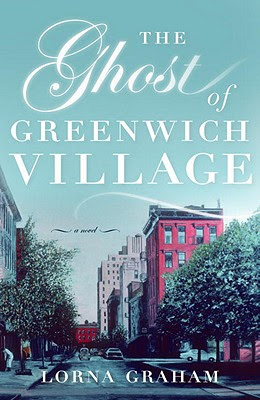 Eve has always dreamed of living in New York City, just like her mum, and now she finally is--in a Greenwich Village apartment inhabited by the ghost of beatnik writer Donald Bellows, who wants to dictate his stories to her. Meanwhile, Eve tries to figure out a way to keep her apartment and her incorporeal roommate. If only Donald would agree to write his memoirs instead of the experimental BS he makes Eve write now!

In case you haven't guessed already, this novel is an adaptation of The Ghost and Mrs. Muir--except instead of a roguish sea captain, Eve gets an irascible beatnik. I thought the beginning was charming and very The Devil Wears Prada-ish. Eve gets a job interview at a morning talk show as a writer, only she has no idea what she's doing. I enjoyed learning about the world of TV writing with Eve--that was actually my favorite part of the book.

But as the novel went on, the questions and inconsistencies in my mind started to build, most of them having to do with Eve. She is really an impossible character to like, and if I had to list all the things that drove me crazy about her, this would be a long-ass post. This supposedly 38-year-old woman has zero life skills, one ex-boyfriend she was lukewarm about, doesn't know anything about current events, makes fun of people who speak German, is an irresponsible dog owner, and doesn't have a TV, cell phone, or a computer. Her home telephone still has an answering machine instead of voicemail. I can see someone going without two of those things, but all of them? You'd think a "writer" would at least get a typewriter.

And that brings me to Donald. Truth: the only things I know about beatniks come from Funny Face. Did beatniks work in awesome-looking bookstores, wear black, and do funny dances in front of Fred Astaire? As far as I know, yes. So obviously I'm not the best judge of these things, but Donald's story seemed really bland, like you could pick it up and insert it into any time period in history. This book tries to be about loving history, but it feels like it's faking it--Eve isn't walking in the shoes of young artists in the 1950s, for one thing; she's too much of a square. She calls Donald's experimental writing confusing and denigrates him for it, then does a complete 180 on the opinion scale when someone else says he was good. So lame. For another, I don't feel like I know any more about beatniks or Greenwich Village now than when I started this book.

Since I knew this was an adaptation of The Ghost and Mrs. Muir, I was expecting some relationship... dare I say romance?... to develop. But there wasn't any romance in this novel. Eve goes on several dates with guys who are kind of cringe-worthy and that's about it. But the romance in Mrs. Muir wasn't so much a romance as a metaphor for writing itself and how characters are a part of the writer. I kept looking for some sort of similar extended metaphor in this book, but didn't find one beyond "people create community." Which = duh.

I'm not saying this is a bad book--it's a very quick read, and I did find it for the most part enjoyable. I just wish the author had gone for the jugular with it, made it tighter and smarter. If it wasn't for Annoying Eve, I would have liked it a lot more.

Guess what? The publisher is offering one copy of this book if you're interested! Fill out the form below or click here to enter. Thank you to TLC Booktours for giving me a chance to review this novel!