The gorgeous Elise lives in Paris, where she is constantly watched by police due to her connection to international criminal, Alexander Pearce. One day while having her typical tea and croissant (tea, because she is British), she receives a letter from Alexander with these instructions: board the 8:22 train in the Gare de Lyon and pick someone of his height and build. Make the police believe that someone is Pearce.

Elise picks Frank, a math teacher from Wisconsin. Apparently Frank has never seen North by Northwest, or he'd know talking to beautiful women on trains is a very bad idea. As it is, however, Frank is gobsmacked by the fact that Elise honoring him with her presence. Once the train reaches its destination, though--ah, Venice!--Frank realizes he's in serious danger and Elise starts to question Pearce's willingness to embroil an innocent in his cat-and-mouse games. 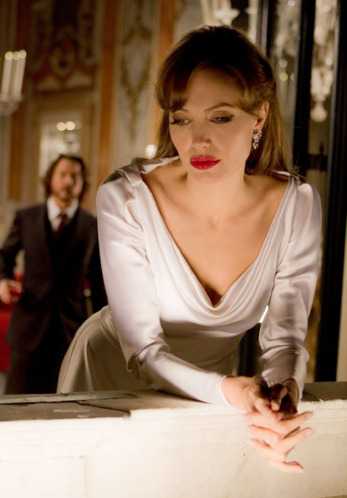 This movie is FABULOUS. If you like any of the classic romantic suspense films like Charade, North by Northwest, How to Steal a Million, etc., then this is definitely right up your alley. The costumes are gorgeous, the locations are romantic, and there's plenty of mistaken identity, bad guys shooting, and double-crossing to keep the plot moving.

By far the greatest strength of the film though, is the acting. I'm not a huge Angelina Jolie fan, but she really impressed me in this movie. When the story starts out, Elise seems almost cartoonishly unapproachable, but Jolie gives her depth--she's not just eye candy; she's vulnerable and smart. I also loved Johnny Depp as Frank--he's so charming and funny, and I could totally see him as a "cool" math teacher.

As for the setting, to be honest I don't think the filmmakers took much advantage of it. Yes, it's Venice, and it's gorgeous, but 80% of the scenes are indoors. And while those interiors are gorgeous, they could be located in any posh European city. There's no art, no decor, to give one the sense of a specifically Venetian atmosphere. Paris was much better utilized as a setting--but then Paris was also entirely exteriors.

That's really a minor quibble to the whole movie, though, which just great escapism. I definitely recommend it for a mini-staycation!
at 1:24 AM