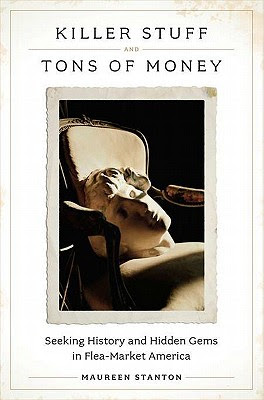 Confession: I've never been to a flea market. Or an antiques show or a garage sale. I've never even watched Antiques Roadshow. My grandmother hates "old stuff," and my mom doesn't want "other people's junk." I didn't even realize average people (i.e., not museums or historic houses) bought old furniture until I was, like, twenty, and that was only because I started watching Martha Stewart. So why did I decide to read this book? I'm not sure... but I'm really, really glad I did.

Killer Stuff and Tons of Money is about the sub-culture of the American antiquities trade, from open-air markets like Brimfield to high-end indoor shows such as Boston Antiques Weekend; from eBay to Antiques Roadshow. There's even a chapter on antique forgers. The hero of the tale is Curt Avery, a mid-range dealer with an amazing amount of knowledge who works his ass off hauling thousands of dollars worth of antiques in his truck from show to show.

The name of the antiques game is caveat emptor: buyer beware. As long as you're a knowledgeable dealer, like Avery, you know what's valuable and what isn't; what's fake and what's rare. Knowledgeable dealers feed off of those who don't know what they're selling, turning what seemed like junk into treasure. The problem is, no one can know everything, and what people want to collect is always changing. Even the best dealers might come across a piece that they know is old, but they don't know how old or how valuable. Furthermore, as Avery explains in the book, by the time you've educated yourself on what the public wants to buy--weather vanes, for example--the taste has already shifted and all that knowledge (and inventory) is pretty much worthless.

I had a history professor once who told us, "Americans LOVE their stuff," and behind every dealer in this book--even the forgers--is a fascination with and love for American stuff. Stanton demonstrates how the entire evolution of our culture can be found in these material goods, from the tines of a fork to a stitching sample. It seems poetic, then, that the trade in these objects is even more a reflection of our culture--as Stanton puts it, "This is capitalism down and dirty." Dealers take advantage of buyers, sellers, and even each other, netting possibly thousands of dollars in profit off of other people's ignorance. At the same time, they could lose thousands if they fail to recognize the value of an object. Most of the dealers Stanton interviews in the book confess to feeling bad about taking advantage of other people this way, but as one man put it, "These pieces are there for the taking. If I don't take them, someone else will." In the antiquities trade, you can sense a similar economic philosophy to that of Goldman & Sachs or Gordon Gekko. At least Avery and the other dealers in the book are ennobled by their honest appreciation of these objects as pieces of history.

It's very rare that I pick up a non-fiction book and read it cover-to-cover, but with this one I did. Stanton's writing is so clear, and the story she tells so fascinating, that I was thoroughly entertained even while I was learning about this culture of antiques. This book was so good, and goes much deeper than just antiques: in the story of Avery and his pursuit of that one big ticket item, the find of a lifetime, I could hear echoes of Moby Dick, The Maltese Falcon, and the ending of The Great Gatsby. He's haunted by the idea that "the one" might have slipped through his fingers for a few hundred dollars. And even if he did find "the one," would he be able to call it quits and give up the gamble of the antiques trade? Probably not.

This is one of those books that I want everyone to read. If you have any interest at all in history or objects, I highly recommend it.