Book Review: ART AND MADNESS: A MEMOIR OF LUST WITHOUT REASON by Anne Roiphe 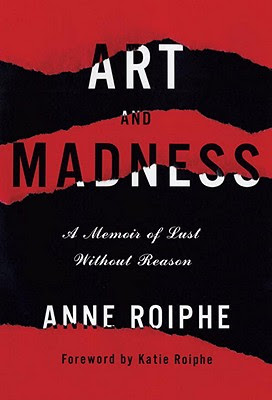 "Normal life beckoned with all the appeal of soiled bedsheets. I wanted to dance in the dark, cheek to cheek, with something dangerous, something that would make me feel alive."

I'm not big on memoirs. In fact, I haven't read a single memoir since I started this blog, nor have I had any desire to do so. But when Jenny from Lit Endeavors tweeted the above quote from Art and Madness, I knew I had to at least give it a try.

Roiphe, a writer of several books both fictive and non, lived in the beatnik heyday of New York City--but not as a writer, as an object of desire. With her primary focus in life being to inspire a great artist, she banged her way through the fifties and sixties--and not monogamously, either. Supposedly all these men were famous, but the only one whose name is even vaguely familiar to me is George Plimpton, and I think that's because I was confusing him with George Peppard from Breakfast at Tiffany's.

My embarrassing lack of knowledge about who these people are aside, the book isn't really about that. It's not a dirty tell-all, it's a coming of age story. Roiphe grew up amidst the upper-class, post-War conformity of Park Avenue, where everything a woman did, including going to college, was meant first and foremost to catch her a husband. Even though Roiphe rebelled against everything her parents' generation stood for, she still suppressed her own desire to create and write and channeled it into the support of the male "geniuses" who surrounded her. Her gradual realization that she had her own voice that was worth expressing, that she could and should be more than just a man's support, is the real narrative of this book.

A few weeks ago when I reviewed The Ghost of Greenwich Village, I complained that the reader got no sense of the beatnik era from the story. That is sooo not the case with Art and Madness. From Hiroshima and the Kennedy assassination, JD Salinger and Freud, men who drink like fishes and keep mistresses on the side, to the beginnings of feminism and free love, the sense of place and time in this book is palpable. It's like watching Mad Men, only more awesome because the mad men in this case are writers. You can see how 1950's conformity--at least on the surface--was a response to the chaos of war and, as Roiphe put it, to the ungrieved-for dead; and you can understand how and why Roiphe's generation violently reacted against that sensibility to create the counter-culture movements of the 1960s.

That being said, I wasn't totally entranced. The book starts to get repetitive and, as I've mentioned, I'm not that big on memoirs to begin with. But the story is interesting and Roiphe's writing style, though seriously old skool, is wonderful and poetic and reminiscent of the clicking of typewriters and smokey sub-basement bars--in other words, totally appropriate to the setting of this book.

If you have an interest in this era, Roiphe's life is definitely worth reading about.