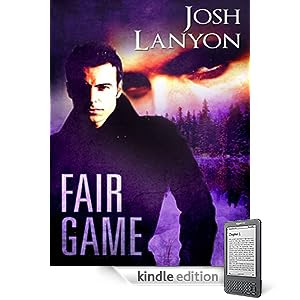 As a former FBI agent turned professor, Elliot is in a unique position to liaise with the authorities after a student is kidnapped from his university campus near Seattle. The only problem is, Elliot's former lover, Tucker, is in charge of the investigation. Awkwardness!

While writing my fan letter to John Lanyon, I started buying up a bunch of his novels in the course of "research." This is another fast-paced and entertaining read by him. There's lots of sexual tension between Elliot and Tucker that is very skillfully drawn-out over the course of the novel. The mystery is also well-plotted: I didn't figure out who the kidnapper was until Elliot did, mainly because of some convincing red herrings.

I also kind of loved the university setting. Elliot got his PhD in history before becoming an FBI agent, which is a reeeally drastic change in career goals to say the least, and it's clear he's gained no love for academia in the interim. The professors--most of whom teach art studio or art history, strangely enough--are portrayed as navel-gazing egomaniacs, not that students necessarily fair much better. I really wanted to find out more about Elliot's backstory in this respect and why he decided to go into the FBI after doing all the work it takes to gain a PhD, but perhaps this is implied in the conservative ideology in this book--Elliot's dad is a retro hippie liberal (as are most of his colleagues at the university) who thinks the FBI is part of the Evol Empire and trying to impose a fascist regime. Elliot is never overt about his political leanings, but he clearly situates himself on the other side of the political spectrum, as does Tucker.

All that aside, however, the main draw of the novel is Tucker and Elliot's relationship. Where did it all go wrong--isn't that the question in every failed relationship? It's one Elliot thinks he has figured out, until he and Tucker are forced to work together again. I didn't get as much insight into Tucker's character as I would have liked--he's basically man-candy, let's face it--but I did think his and Elliot's interactions felt authentic and that there was a lot of chemistry between them. Plus, it's in the nature of a novel like this to only know the other characters from a single character's perspective, and watching Tucker progress from a royal bastard to, like, greatest guy ever! was kind of fun.

Definitely another solid mystery from Lanyon that's worth checking out.