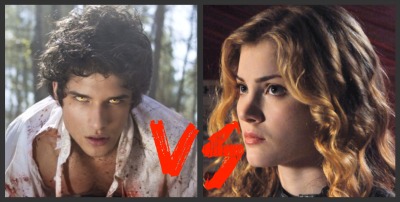 This summer two teen-centric series premiered on television: Teen Wolf, which is a remake of a movie I've never seen; and The Nine Lives of Chloe King, which is based on a book and has a very long title.

Both shows are cheesy but good for some "lite" entertainment. But which one is better? Compare and contrast time, kids! Behold, I give you this spreadsheet that took me way longer to put together than if I'd just written a paragraph:

As you can see, these shows are pretty similar, but NLoCK is more feel-goody and lighter on the dramaz. I would also say Teen Wolf is slightly better-written than NLoCK.

What interests me about both shows is how both kids seem to have sexuality tied to their supernatural abilities. This is especially true for Chloe, who starts attracting boys the way a Coyote Ugly waitress attracts barflies as soon as she turns sixteen--and comes into her Mai abilities on the same day. Coincidence? I don't think so. Scott also magically starts dating only after he's been bitten by a werewolf.

Both shows are über-silly and great for a light brain break. And while I do think Teen Wolf is better-scripted and -produced, there's something about NLoCK that keeps me from hating it, despite the fact that I start grinding my teeth every time I see Chloe's Pier1-sponsored bedroom or her and her mom have a ridiculous heart-to-heart. It's still better than The Vampire Diaries, anyway.

Is anyone else enjoying these shows despite themselves?