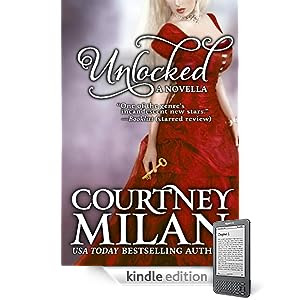 Lady Elaine has spent the last decade as a pariah in society, mocked for her laugh, and all thanks to one man--Evan Carlton. Now Evan has returned from the Continent and is intent on righting his past wrongs with Elaine; partly because he can't stand himself if he doesn't, but most especially because he's in love with her.

The last Courtney Milan book I read was Proof by Seduction, and this one is definitely better. The story doesn't lag at all (it is only 111 pages) and the beginning is very emotionally engaging--especially if you have any experience with being made fun of, and who doesn't? It's impossible not to feel for Elaine, who has started to erase the personality that makes her herself because she's constantly attacked in society. Meanwhile, Evan's evolution from bully to beta male is a little more difficult to believe, and his--career, I suppose you would call it?--as a mountaineer seemed utterly random, but he's not an unsympathetic character.

At the same time, there were a lot anachronisms and convenient plot devices going on this story that kind of threw me. Elaine runs out into the hallway with her dress undone and just happens to encounter Evan, who just happens to have rope in his room? Hmm. Okay. And I really can't envision a 19th-century male agreeing to be "just friends" with a woman, or even understanding what that means. But Evan and Elaine's relationship was still sweet and sexy and they had a lot of chemistry, so I could overlook the inconsistencies.

The more interesting relationship in the story for me, however, was between Evan and Diana. Diana is Evan's cousin and was his partner in tormenting Elaine--and a lot of other people--before he escaped to mountaineer across Europe. Diana couldn't leave England, though, so she continued to pick on other people in London society. She's actually pretty detestable, but there's one person who has her complete loyalty, and that's Evan. She relies on him to be her one true friend, but knows that friendship is threatened by his love for Elaine, who undoubtedly hates Diana after everything she's done.

Unlike Elaine and Evan's relationship, I wasn't sure this one was going to work out, even though I (weirdly) wanted it to. I also wasn't sure if or how Diana's character would evolve. Out of all the characters, though, I think Diana underwent the greatest evolution and served as an anchor to the entire story.

Overall, this novella is definitely worth the price of its .99 download. I wouldn't say it's the best thing I've ever read, but it is a nice romantic escape.
at 5:49 PM