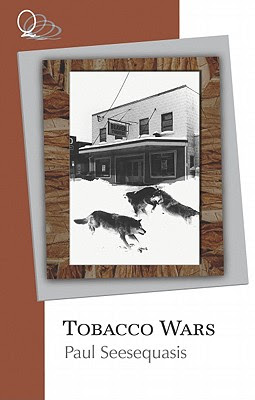 In this novella, Pocahontas marries John Rolfe and they sail to England, only he dies on the voyage there, and she remains alive to flit about London in the company of characters like Ben Johnson and Inigo Jones. And they're all really lecherous and gross, and Pocahontas turns into la Malinche; and Ben Johnson meets Mary Read and Anne Bonny, and writes the most incredibly awful play, and is sexed up. And there's also a bear.

So. This is what I think of as a dick waving book. You know in middle school or high school, how there was always a guy[s] who was really insecure about his masculinity, so he worked extra-hard at being crude and sexually objectifying women to make up for it? Yeah. I'm not saying dick waving books are necessarily awful--practically all of Ernest Hemingway's novels are dick wavers, let's face it--it just annoys me, purely as a female person. And Seesequasis is no Ernest Hemingway, not in this novella anyway. At least with Hemingway, you get a sense of the author, of the emotions and life experiences that he knows, first-hand. With Tobacco Wars, I felt like author was hiding behind a front of ridiculousness and crudity, and almost afraid to be honest with the reader.

I can see where Seesequasis was going with this novella (tobacco, Indian woman marrying an English dude, bears peeing rivers--it doesn't take a genius), and it's not as if the whole book is a farce--he does make oblique references to boarding schools and poverty, for example--but what he's trying to say in this book has been said before, in much more effective ways. When I wasn't grimacing at some mind-boggling turns of phrase ("the life-giving fountain of her voluptuous vulva," seriously? Please do not ever alliterate vulva with anything ever again, I beg of you) I was bored because there wasn't really anything to latch onto to carry me through the story. No emotion, believable characters, or even anything of intellectual interest; just really sophomoric sex. Yawnz.

Obviously this book wasn't what I was expecting at all. But if phrases like "voluptuous vulva" and "Do those embedded trading post beads make you come," don't make you want to call for a writer's intervention... well, then it won't bother you as much as it did me. Thank you to TLC Booktours for giving me the opportunity to review it, though!