Harry Potter and the Ungrieved-For Dead 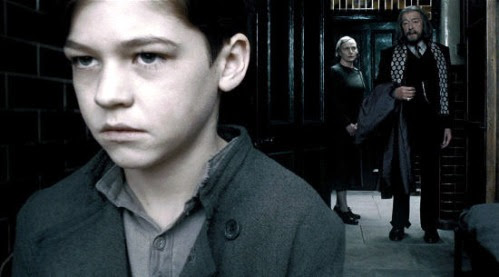 One of the things that's always struck me about the Harry Potter films is that the scenes of Tom Riddle's childhood are so clearly stylized as being circa WWII, from the clothes to the sets and cinematography. To be honest, it's bothered me. Yes, I suppose it makes a certain amount of sense, if Harry is of my generation and Voldemort is of my grandparents' generation, that Tom Riddle would be going to school in 1930s/1940s Britain. But is that kind of time scale really reliable when it comes to wizards? Dumbledore was supposed to have been born in 1881 (although I've always pictured him growing up in late Georgian/early Regency England, mostly thanks to the illustrations in the US editions), and who knows how long Voldemort was alive before he was killed the first time. Furthermore, if the war against Voldemort was the wizarding equivalent of WWII--and Rowling definitely intimates that's the case throughout the books--then wouldn't Harry's parents be part of the "war generation," not Voldemort? 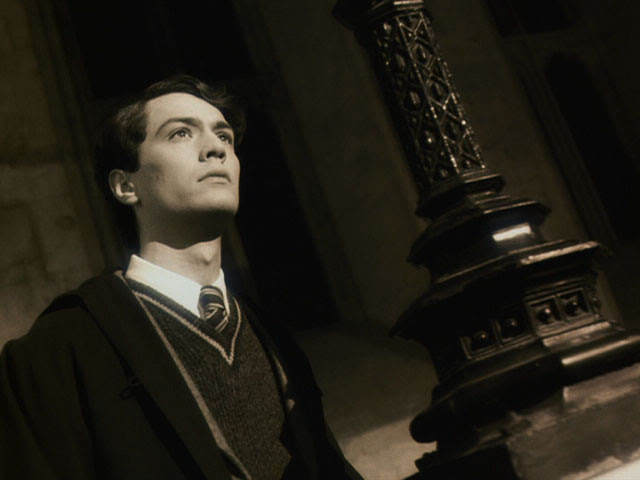 I've never really known what to make of this issue. It seems logical to say that WWII is so embedded in our cultural memory that Rowling naturally drew parallels between it and a world-changing war between wizards, but then why would the filmmakers design the Young Tom Riddle scenes the way they did? A lot of hands go into making movies, but interviews with Stuart Craig, in charge of production design, suggest that JK Rowling was very involved in the look of the film. But to what extent?

In any case, I put this question aside as one of those things I would never resolve, until last week when I was watching Harry Potter and the Deathly Hallows Part 2. During the ending when Harry faces off against Voldemort, I was suddenly reminded of something Anne Roiphe had written in her memoir of 1960s New York, Art and Madness--that post-War America was suffocated by the memory of "the ungrieved-for dead," which she intimates contributed to the zeitgeist of the '50s and '60s, and the Babyboomer generation's sense that their parents were hypocrites.

Are those who died in Voldemort's war, such as Harry's parents, ungrieved? All through the Harry Potter series, memories of the dead are present and affect the actions of the living. Many characters have friends and loved ones who died fighting Voldemort--including of course, Harry himself. But have these dead been put to rest? From nearly the very start of the series, one gets the sense that people are holding their breath, waiting for the other shoe to drop. They may have moved on with their lives, but they still live in fear of Voldemort, refusing to say his name and slightly fearful that he may one day return. Of course, this serves to foreshadow Voldemort's actual return for the reader, and may simply be a useful narrative device.

At least as far as Harry is concerned, he spends most of the books grieving for his parents. I do think there are ungrieved-for dead in Harry Potter, but I don't think they're people like Harry's parents who fought against Voldemort. Instead, I would argue that the ungrieved are those murdered for horcruxes. Tom Riddle certainly didn't grieve for them, and their deaths literally tether his soul to the world, ensuring that he can never die and will always be able to return.

Several people are killed on and off-page during the Harry Potter series, but the ones used to create the horcruxes are different. They're not killed in self-defense or the heat of the moment; it's cold-blooded and self-serving. If just killing someone created a horcrux, wouldn't Snape have a horcrux from killing Dumbledore? Or Bellatrix Lestrange from killing Sirius? Voldemort would also have many more horcruxes than he did if every person he killed became a horcrux. The horcrux spell traps the soul because the horror of that death reverberates with neither justice nor guilt. Instead, said people's lives are nothing but a tool to be used for the wizard's own survival.

I think this why Voldemort's war in the books, and scenes of his childhood in the movies, have such a WWII sensibility. It's not just the fact that many died fighting Tom Riddle, but the fact that one person was able to inspire so much destruction and death, that both the movies and the books want to underscore. It would be enough to tear apart the wizarding world completely if it weren't for one thing--the Boy Who Lived. Harry represents everything Voldemort, and others like him, can never kill: love, hope, the human spirit. Even faced with the worst the world has to offer, Harry keeps on fighting.