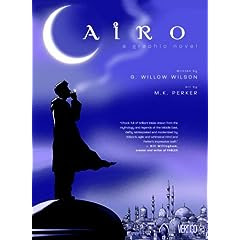 This graphic novel is an odd but fun mixture of humor, action, politics, religion, and magic. Although I don't think it quite came together, it was still a refreshing read for me.

I first heard about Cairo on Book Blather, and I was immediately attracted to its promise of mixing Egyptian folk tales with modern-day Cairo. Ashraf is a drug smuggler who gets into a bit of trouble when he takes a hookah from a warehouse. Unbeknownst to him, the hookah belongs to the wizard, Har, and he really wants it back. So he kidnaps Ali, Ashraf's childhood friend and almost-brother-in-law, plus some random American chick named Kate, and ransoms them for the hookah. Shaheed, a "Lebanese-American," also gets involved when Ashraf sells him the hookah for twenty dollars.

This graphic novel starts off with a surprising amount of humor, which luckily balances out the fact that it's also quickly obvious which folk tale the book is ripping off of (psst, it's Aladdin). There's a lot more than that going on in novel--some Ancient Egyptian legends are brought into it, which at first seems really cool but winds up being kind of awkward; there's talk about cultures coming together peacefully and forgiveness; and there's some pro-religion stuff, as well--only featuring the Qur'an. I have to confess that caught me a bit off guard--one isn't often confronted with Muslim evangelicalism in the US. I'm not sure it serves much of a purpose, but it's very brief.

As for the art, to tell the truth I was disappointed. The cover is absolutely gorgeous and elegant, but the illustrations inside don't live up to that. There were a few moments of true artistry that caught my eye, especially towards the end of the novel, but most of the panels were busy and scribbly, and quite literal.

Story-wise, the beginning was very promising and there were parts that I thought were really cool. It just didn't all come together in the second half. And even though I think the author's heart is in the right place, from an ideological standpoint I have to say the conclusion to the tale undermines all the talk about how being a suicide bomber is, like, really not a cool idea, and violence doesn't solve problems. But like I said, overall I was entertained. And I actually did appreciate the change of pace reading a graphic novel with a lot of action, like this one, gave me.