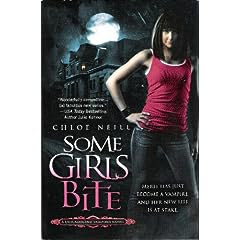 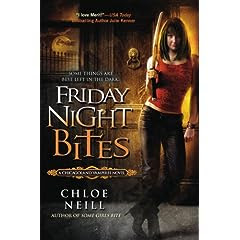 Find these books at an independent bookseller near you (via IndieBound).

This is a great, fun new UF series with a lot of wit, humor, action, and romance.

Merit is a grad student in Chicago studying romantic literature like Tristan and Isolde, when her life is completely changed by a random attack on campus.  Instead of letting her die, Ethan, the leader of Cadogan House, changes her into a vampire without asking her permission.  Suddenly Merit has new powers, new responsibilities, and is forced to abandon the life she chose to make something out of one that she didn't.

I read both these books with Colette from A Buckeye Girl Reads as part of our bookclub, Romance Readers Anonymous.  I really enjoyed both books--the second more than the first, actually--but it's difficult to explain why.  They aren't perfectly plotted, but they do have something that makes them alchemically enjoyable.

The first book starts off fairly slowly, as Merit is being stubborn in accepting the fact that she's been changed into a vampire.  She wants desperately to hang onto the remnants of her old life, including her roommate, Mallory.  Unfortunately, she finds out even the people she holds dear and beloved at not what they seem.

Then she suddenly has a moment with Ethan, and the book really picks up from that point.  There's also Morgan, a vampire who's part of Navarre House.  I'm not going to go into these two guys a lot, because I feel like I've already beaten the point to death, but let's just say I am Team Morgan all the way.

Anyway, the real appeal of these books in Merit's relationship with Morgan and, I admit, Ethan.  Every book has a mystery (which I won't go into for fear of spoilage), but that seems to be kind of incidental.  In the second, I saw most of the plot twists coming a mile off--yet I didn't really care because I was enjoying reading about Merit and the other characters so much.

Another appeal is Merit, who is bookish and geeky (yet another protagonist who reads) and romantic; but suddenly finds herself with amazing athletic abilities and attracted to Ethan, who is definitely not the most romantic guy on the planet.  To say the least.  Merit doesn't truly know herself now that she's a vampire, and that makes for some very interesting reading and problems for our heroine.

I really like these books and I can't wait for the next book to come out.  I definitely think Chloe Neill has created a great series.