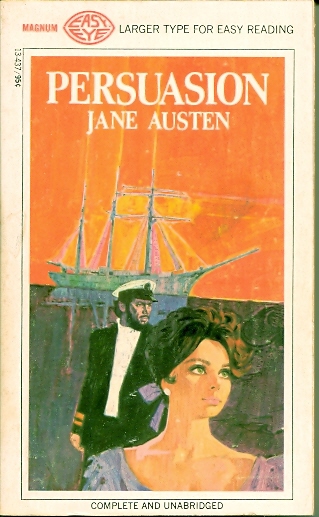 Find this book at an independent bookstore near you (via IndieBound).

I just had to include the actual cover of my copy of this book, because it is u-g-l-y.  Captain Wentworth looks like Ahab.  And the Armageddon-ishly orange sky and off-kilter horizon don't help matters.

Anyway, this IS a review, not just a post where I make fun of book covers.  Persuasion is a novel by Jane Austen, wherein Anne Elliot, who has DOORMAT stamped on her forehead, is in love with Captain Federick Wentworth.  But, when he proposed seven years ago, she was persuaded by her family and friends to refuse him.  Instead of trying his own brand of persuasion on her or the people who influenced her, Capt. Wentworth stomped off in a huff and made tons of money stealing other people's ships and cargo.  Now he's back in town, which means he and Anne pretend to ignore one another for the entire book until the very end.

My main problem with this novel was Capt. Wentworth.  I really didn't like him, and I don't buy him and Anne as a romantic couple.  Let's take a closer look at some of Wentworth's actions, shall we?

As for Anne, I'm of two minds with her--a part of me really, really liked her.  I think she's an absolutely wonderful person.  And while I did mention she's a doormat (she is), that doesn't mean I think she's a weak character; quite the opposite, actually.  If I had to live in her house with her father and sister, I'd either kill myself or go completely mad, so I admire her fortitude in that respect.  But at the same time, Anne is almost exactly like Jane Bennet from Pride & Prejudice, in that she's way too nice and too forgiving; except Anne hasn't got a Lizzie around to point out when people might be taking advantage of her, or to get her to stand up for herself before the world rolls over her like a giant bulldozer.  There were times during this book that I found myself saying, "JESUS CHRIST, ANNE!" and wanting to shake her.  So what I really wanted from this novel was for Anne to assert herself just once.  To say something like, "If you think I'm so pretty, why did you tell Louisa and Henrietta you never would have recognized me, you giant cocksucker?"  But she never does--she never calls Wentworth (or anyone else) out on his behavior, toward her or even anyone else; and strangely, she never allows herself to feel anything.  As soon as she gets excited, or hopeful, or sad or angry, she tries to "calm herself" until the feelings pass.  I can only guess this is because if she did, the floodgats would open and she'd go bat-shit insane like the rest of us; but I would have liked to have seen that moment: the moment Anne Elliot reaches the end of her rope.  Because you know it's coming.  OH YOU KNOW IT.

My point is, the status quo was maintained throughout this novel--when it started, Anne was in love with Capt. Wentworth, and at the end she's in love with Capt. Wentworth.  No change.  And because I liked Anne so much, I wanted someone equally as awesome for her to fall in love with.  Unfortunately, that person does not exist in this book.  I think it's pretty safe to say Anne will continue being a doormat and Wentworth will continue doing whatever the hell he does, without much regard to her desires, which he never inquired after.  But to be fair she wouldn't tell him what they were even if he did ask.

Does it deserve to be called a classic?

You might think because of that itsy-bitsy rant I just went into that I didn't like this book.  Au contraire, my little cabbages!  I actually think this is quite a well-executed work of art--and I don't often call novels that.  But here the term is very apt.  The way Austen starts off the book, almost hiding Anne, and then bringing her slowly to the forefront of the story and revealing her relationship with Wentworth, was masterfully done.  This book isn't an easy read, but it does completely pull you in, and you have to keep reading.  Which is amazing because, really, not that much happens as far as plot goes--it's almost entirely character-driven.

This isn't a story about a romance.  It's about how we all make compromises for the sake of the people we love.  That is the nature of relationships, especially with family.  And allowing oneself to be convinced to act against one's nature or desires isn't necessarily a bad thing.

But at the same time, the book is about how people let themselves be dissuaded from going after the things they want by fear.  This is especially true in Anne and Wenworth's case--Wentworth convinces himself that he can love Louisa because he's afraid Anne doesn't like him anymore.  Austen shows that what drives people's action is rarely what they want or don't want to do, but the influence of their friends and family, and their own insecurities.

This is why Austen is still so relevant and popular (and I'm sure I'm not the first one to say this, but it bears repeating):  she's such a keen observer of human nature that it's still very easy to sympathize with her characters, and probably always will be.

Sir Walter Elliot is really a demon, using the mirrors in his bedroom to travel to and from Hell.  His daughters, half-demon spawn, have succeeded in spreading discontent and misery throughout the county--all except for Anne, who has resisted the influence of her demon side for many years.  But will the demon remain quiet when Capt. Wentworth returns to Somersetshire?  Or will it emerge to wreak vengence on Anne's innocent cousins and anyone else who dares mess with her man??